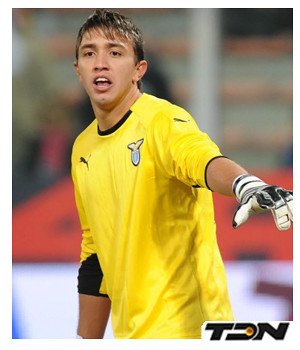 Lazio’s current success in topping the Serie A league table until the eight week surprised lots of people who have begun to discuss whether they can really challenge for the title this season.

Sharing his thoughts about the club’s recent good run, the Biancocelesti keeper, Fernando Muslera, revealed the secret of his team’s current success as an attempt to insure people that their achievement is more than just luck.

With just a little tweak on the team surely people are wondering about the quality of Lazio’s team as the Biancocelesti practically only added one major player in this season’s squad which is Brazilian midfielder, Hernanes. However, there are some important conditions that changed the team’s achievement so far such as the fact that they are not involved in any competition in Europe and also the strong desire from the players to fix their poor results last season.

Those reasons were the key secret that Muslera revealed during an interview with Sky Italia recently, adding that his team must also take things a step at the time and keep their feet on the ground with humility and hard work. The keeper also believed that they do have a good chance in chasing the title this season especially because the usual dominant force in the Serie A for couple of seasons, Inter Milan, aren’t actually that powerful anymore.

“We suffered when we played three games a week [last season]. We must go step-by-step and keep the humility and the desire to grow. There are no more secrets in today’s football. This Lazio side is doing well with humility and the desire for redemption,” Muslera said. “The Inter side that I saw on Sunday wasn’t that of old. We must profit on these things. “

Moreover, the Uruguayan international also said that his team deserved to be up there in the top with all of the big boys although he believes that it would be too soon to predict about anything. Muslera believes that everything will look more clear when the Serie A reaches the second half of the season as by that time the true challengers of the title should have shown their true color.

“I don’t know if we’re worthy of first place, but we’re certainly worth of a place high up in the table. The season is long. We can say more about it in the second half of the campaign,” Muslera stated.

After the eight week of Serie A, Lazio that haven’t really been looked up as one of the Scudetto candidates still leads the championship with two points above Ac Milan and four over Inter. Their current success is being considered a big surprise considering the fact that last year the Biancocelesti were fighting for relegation until the last day of the competition.