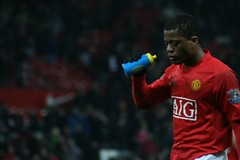 In only the latest drama to come out of the France camp, team captain Patrice Evra was mysteriously absent from France’s press conference today. Evra’s unexplained absence has the press humming with speculation.

Continuing the trend of impossibly shambolic team/staff relations, the most prominent rumour so far has been that Evra has had the captain’s armband taken away from him, likely due to his training ground bust-up with the team’s fitness trainer, Robert Duverne. Add in the fact that slightly surreal photographs of Nicolas Anelka landing at London’s Heathrow airport attempting to look inconspicuous while wearing dark shades and a familiar sulky expression after being dumped out on his behind by the FFF, are now hitting the papers and you can’t really blame the French team from wanting to throw in the towel. Life’s got to be hard in the France camp right now.

In all honestly though, the French don’t seem to doing themselves any favours, do they? Although manager, Raymond Domenech, clearly stated at todays’s press conference when asked if he regretted sending Anelka home that this is ‘not the time for taking stock,’ the entire mood surrounding the players indicates the opposite. Walking around like a team that has been eliminated (mathematically, they’re still alive) appears to be the route they’ve taken. Ribery has already been on French television program, TéléFoot, apologizing to the French public for the team’s performance at the tournament. I’m not sure who that’s helping other than his ego and feelings of guilt. While Ribery is right in his estimation of France’s performance being that which is worthy of an apology, the time for feelings is well behind them at this point. They’ve just got to get on with it. I very much doubt that any words that these men have to say would heal the deep wounds they’ve seared into the face of French football. Surely, France supporters would much rather see their team simply get it together enough to play well in their final group match rather than doing the whole whodunit thing in the press.