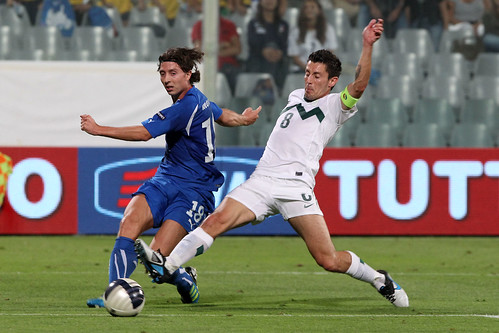 Fiorentina’s final hope in keeping their star midfield man, Riccardo Montolivo has pretty much ended as the club’s president Mario Cognigni confirmed that there will be no more negotiation with the player as Montolivo re-affirmed his desire to leave.

Cognini revealed that the latest talks regarding the player’s potential renewal apparently didn’t ended the way that the Florence based outfit wanted as instead of agreeing to the new renewal being offered, the Italian international once again re-instated his wish of leaving for a bigger club.

“He confirmed his desire to leave and now the matter is closed. He explicitly said he has ambitions for a more successful club than Fiorentina. He does not believe in our project,” Cognini said. “We get the feeling the player heard calls from outside sources. By reacting like this, he proved he is no longer a Fiorentina player and does not belong here.”

Despite stating a very strict statement regarding Montolivo’s future, Cognini stated that the Viola’s management have no intention in freezing the player from the squad as all decisions is on the hands of the current coach, Sinijsa Mihaljovic. Although he is still under contract, there’s always a chance that the Italian international won’t be used again by the team this season considering he has pretty much disappointed the club, should Fiorentina does that though, the midfielder would definitely leave on January as he is eying for a spot in the Italian national team for Euro 2012, which can only be earned by constantly playing.

“However, Montolivo is under contract and remains at the disposal of Sinisa Mihajlovic, so the Coach will decide whether to play him or not.”

The fact that he is reportedly being linked with some top clubs such as Ac Milan and Bayern Munich can actually influenced the club’s decision as should Montolivo indeed decided to leave in January than Fiorentina could at least make a little money from the sale. However, should the 26-years-old skillful midfielder is being allowed to finish his final season, when his contract runs out in 2012, the Viola must allow to lose one of their best player without any compensation.

Rumors spreading heavily this summer that Montolivo already had a verbal agreement with Milan when his contract ends in the summer, so it’s definitely interesting to see whether the rumors are true or not, although from the current condition it does leading into that path. Still, should the player is indeed being frozen out, then there could still be a battle in the market for his signature as Fiorentina will obviously looked for clubs who arrives with the most adequate offer for the player.