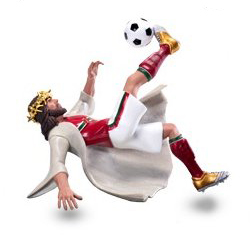 Believe it or not, 18 days from today, MLS will be back, baby.

By the way, yes, that is Christians’ Lord and Savior bicycle-kicking a soccer ball. Which brings up an interesting question: Could Jesus fire a kick toward the net so hard that he himself could not save it?

Another interesting question: is it sacrilege to even pose Jesus (or that question) in such a fashion?

I don’t think so, and I will tell you why: “sacrilege” is defined as “the injurious treatment of a sacred object”. Now, Jesus is pulling off a pretty amazing feat there (with his feet, no less), so I don’t think this photo or the question regarding it fails to show reverence for Him. I think it actually shows he can kick some serious… well, let’s just go with soccer balls. I don’t want to engage in any taboo here. No, never, not me.

MLS has its own Jesus, or at least a guy who looks a lot like him when he grows out his playoff beard. I am talking about Frankie Hejduk of the Columbus Crew, of course. One of the biggest story lines of this season will be whether Frankie and his Crew can repeat as Supporters Shield or MLS Cup Champions, or both. So, what I am basically asking is: will there be a Second Coming? OK, that could have been sacrilege.

Or at least blasphemy, I suppose. But then again, I certainly said some insane, irreverent things in last year’s 2008 MLS Season Preview: Schedule Edition post. Heck the sinners over at Deadspin even picked up on that rant, which was one of my first for STO. So, I guess this year’s MLS Season Preview: Schedule Edition has a lot to live up to. Or “resurrect to”, I reckon, if we are talking about Second Comings.

In any event, this will actually be the Fourteenth Coming of an MLS season, which sounds very dirty. According to Wikipedia, that makes this year the league’s quattuordecenniel anniversary. That means if this were a wedding anniversary, it would be the “ivory anniversary”. It appears to me that there is no “ebony anniversary” though. Whoever came up with the anniversary gift list was obviously a racist.

But, despite that fact, the 2009 MLS season has gifted us with story lines galore. Can the Crew try to pack more trophies on their mantle? How will their old manager, Sigi, fare this year? Will his new Seattle side finally break the “curse of the expansion team”, which has resulted in the two most recent additions to MLS (TFC and SJE) absolutely blowing to high “h-e-double hockey sticks” during their first season. So, many questions abound, but what are the answers?

In the West, can SJE continue to improve as quickly as they were at the end of last season with the Sheriff of Nottingham, Darren Huckerby, leading the way? Will the Dynamo be dominant without De Rosario? Can Chivas hold on to Special K? Will Dallas get Cooper the help he needs? Can RSL keep the momentum from last year’s playoff run? Will the Galaxy improve under the watchful eye of Bruce Arena? Will Carey’s Sounders make any noise?

In the East, will TFC’s offseason moves pay off or will they remain mired at the bottom of the table? Can New York prove last year’s magical run through the playoffs was for real? Will DC actually be better without Gallardo? Can NER get back to the MLS Cup, and will they actually win it this time? Can Jimmy Conrad of the Wiz get any more dreamy? And did the Crew need Sigi to win it all, or can they repeat without his assistance?

Finally, and most importantly, will we ever find out why the Rapids refused to play Christian Gomez at the end of last year before deciding to deal him to DC this offseason? Was he nursing some psychological injury? Was he in the coach’s doghouse? Was he kidnapped by Bigfoot, who now keeps him in a hole like in The Silence of the Lambs much to United’s dismay? Was he swallowed by the Dick? Wow, I’m sorry. That last pun was soooooooo wrong. Now I am definitely going to hell whether that Jesus joke is sacrilegious or not.

Who knows what happened to Gomez? Please tell me. I have asked for weeks now and still gotten no answer. All I know for sure is, I am glad I have gotten through this entire post without even mentioning the horror (or whore) that is the Galaxy’s pouty star player, Dav… Damn, I almost messed up there. His MLS career is one resurrection I wouldn’t mind skipping.

In any event, for the next two and a half weeks, I will be catching you up on all the comings (Second and otherwise) and goings of the past MLS offseason in order to get you ready for 2009. For each team, I will be letting you know who is in charge, who they have on the attack, what their defense looks like, and what movie their team will best resemble.

That is a weird last category, I know. And I want to give you one spoiler alert – no team will best resemble The Passion of the Christ. Well, maybe the Crew will, now that I think about it. Nah! Nevermind. I have said enough things to ensure my eternal damnation in this post already, so I might as well quit while I am behind.

In the last two days before the season kicks off I will give you some updates regarding the teams I already posted on and I will make some predictions that will ultimately be wrong.  Long story short, I will do my best to pass on all the info you need to devour prior to first kick on March 19. So, here is the schedule for my all MLS Season Previews:

So, come back to STO over the next two and a half weeks to learn about the teams that will take the pitch in MLS during the 2009 season. I will try to answer some of the questions I posed above, but we will not know whether my answers are correct until the end of the 2009 season. Hey, I’m no Doc Brown and this economy definitely prohibits me from purchasing plutonium.

So, I guess what I am saying is I can give you some info regarding the upcoming season, but I can’t tell you the whole truth. Only Jesus can do that. After all, he said “ye shall know the truth, and the truth shall set you free.”

That brings up one more question. If Bigfoot did kidnap Gomez, can even the truth set him free?

More Posts by The Yank