Player of the Week: Kheli Dube. I have to say, Dube’s receipt of this week’s honor has nothing to do with the vulgar, racist language he was taunted with in Columbus last week. Rather, he earns the hardware strictly based on his on-the-field pursuits. 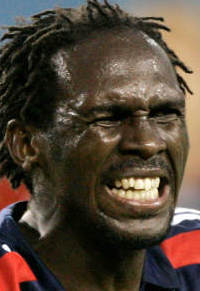 He set up the Rev’s first goal and scored the second, and all game he was their offensive focal point. Dube was the center of controversy and could have let distraction detrimentally affect his game. Instead, he played like a champion and forced his team into a draw when most teams would have laid down for a loss. Congratulations, sir. Both on your play, and the way you have conducted yourself in the midst of a MLS debacle.