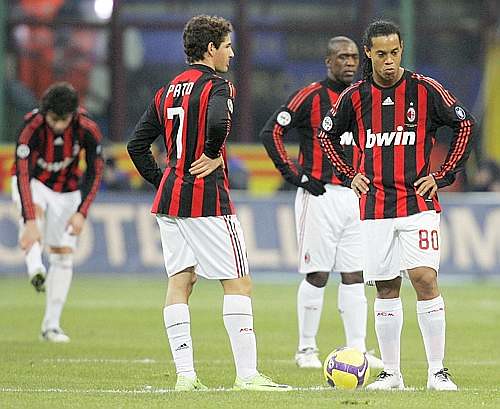 Ac Milan got themselves a positive morale boost ahead of their important Champions League match against Real Madrid next midweek after beating Chievo Verona 3-1 in the league.

Playing in front of their fans at San Siro, the Rossoneri’s Brazilian samba boys, Alexandre Pato and Robinho were the ones responsible in providing the woes for their opponents by scoring all Milan’s goals.

Pato who get his first starting place after recovering from a thigh injury last month, proved that he is really on top form after bagging Milan’s two goals in the first half. The 20-years-old striker open his account on the night with a magnificent first time volley from Zlatan Ibrahimovic’s excellent cross from the left side. Not long after the first goal, another excellent Ibra- Pato combination happened again as the Swede international play a quick free kick by sending a through pass for the Brazilian who finish it with a thunderous shot.

Getting a solid 2-0 lead in the first half, Milan predictably slowed down the pace in the second pediod as they were saving some of their strength for the important match against Madrid. This approach gives Chievo more initiative to attack the home team although the Rossoneri actually managed to cope with it, the away team luckily gets a goal after Ibrahimovic accidentally deflected Sergio Pellisier’s header from a corner kick into Christian Abbiati’s net.

Just as the away team starting to have a believe that they might still steal a point in San Siro, Milan’s new signing, Robinho, finished of Chievo’s hope by scoring his first goal in the Rossoneri color. After haven’t really had a good luck in front of the goal, the former Manchester City player finally gets what he’s been crying for in a style after waltzing pass Stefano Sorrentino in goal before putting the ball into the net.

Overall the Rossoneri put out a fine performance especially in the first half with the offensive partnership of Ibrahimovic and Pato started to click in very very well. There’s a bit worrying news though for Milan as on the night they were forced to replace Thiago Silva, who seems to injured his ankle in the second half after making a tackle to a Chievo player. The injury surely jeopardize the Brazilian international’s chances in playing against Madrid in the midweek.