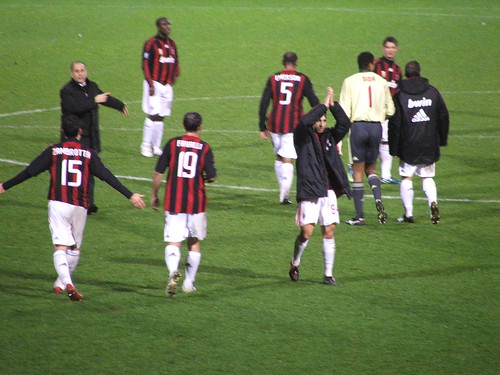 Ac Milan temporarily reached the top spot of Serie A after picking up an important victory over Cagliari on Tuesday, an own goal from Pisano and Zlatan Ibrahimovic’s excellent effort gave the Rossoneri a comfortable two goals lead.

Meanwhile in the other game, Fiorentina still can’t get their consistent form going after failing to pick up a victory against Siena in the Tuscan derby, a result which will force Delio Rossi to improve the Viola’s performance in the new year.

In Sardinia, Ac Milan collected a pretty comfortable victory over Cagliari and it took them only four minutes to take the lead through Pisano’s own goal after the player tried to block Robinho’s cut back which was about to reach Antonio Nocerino. It wasn’t an easy game actually for the Rossoneri especially with the heavy rain and also bad pitch which isn’t actually suitable for the club’s passing game style, forcing them to get into more physical battle with the home team players.

However, even without hitting third gear, Milan managed to secure the three points in the second half after Ibrahimovic flicked passed Cagliari goal keeper shuts down the home team’s resistance. Tiredness were visible on the Rossoneri player’s performance but they will get their needed rest with the current break before starting the season again in January.

Meanwhile, the Tuscan Derby ended in disappointment as both Fiorentina and Siena can’t seem to find the back of the net despite both teams actually have several goal scoring chances both in the first half and also second period. However, poor finishing from both teams pretty much forced them to settle for just a point in the last match before the temporary Christmas break, obviously not a pretty gift for the fans who were expecting something more before the end of year.

There will still several more matches on Wednesday, which could decide the league positions especially at the top before the new year. Milan are expecting that the outcome from Udinese-Juventus match won’t change their current position in the table as leading the Serie A before the break could give a sense of satisfaction for the Rossoneri players.