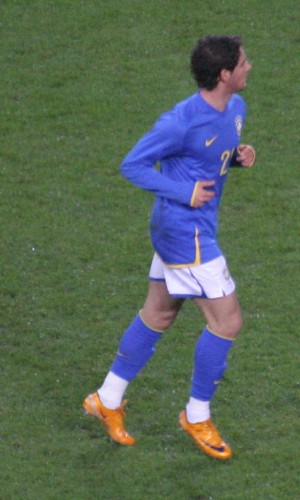 The new season hasn’t started yet but Ac Milan’s starlet, Alexandre Pato, already has his preparation interrupted with series of injuries as the 20-years-old striker sprained his ankle during his club’s latest training session.

After getting a medical test, the Milan’s medical staff confirmed that the Brazilian player will be rested for about five days and undergo physiotherapy to make him fully fit next Monday.

Although the injury doesn’t look to be a serious one, the Rossoneri doesn’t want to make any gamble regarding their star striker’s health condition who has been having plenty injury problems last season.

The Brazilian striker himself has just actually recover from a typical kind of injury that denied him to play in a friendly game against Panathinaikos in Detroit, USA, couple of weeks back. However, the 20-years-old striker did make a speedy recovery that allowed him to start for his country in a friendly match against the United States last week.

Having the need to rest for five days would surely means that Pato won’t be available for the upcoming Trofeo Berlusconi, which is scheduled to be played on Sunday, August 22. On the annual pre-season friendly match held at San Siro, Milan, the Rossoneri will once again meet their arch rival Juventus.

Surely this small injuries that Pato’s been having in the pre-season bring lots of worries for the Rossoneri’s who certainly hopes that the young striker could stay fit for most of the upcoming season so he can lead Milan’s attack. The 20-years-old himself has looked more mature in the pre-season and could really explode this season if he can stay away from injuries.