Milan Closing In On Robinho 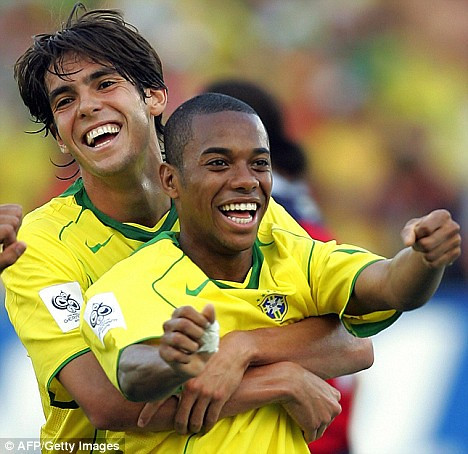 Despite already making a coup of a signing with the arrival of Zlatan Ibrahimovic, it looks like Ac Milan are still working hard to sign another exciting star, Robinho.

Reports from Italy suggested that the Brazilian international who has been left out by his current club, Manchester City, is very close to join the Rossoneri and could be announced just before the transfer market ends on August 31.

The hint about the possibility of Robinho’s signing came from Milan’s owner, Silvio Berlusconi who stated to the press that should the player they are interested on is available, the club won’t hesitate to sign him. The fact the former Real Madrid striker is one the players that City are considering to off load the player, the press believed that the 26-years-old player will not reject the Rossoneri’s offer.

“If a certain player we are thinking about were to reveal himself to be acquirable, we are ready for another coup,” Berlusconi said to the press.

Milan reportedly is preparing to land Robinho with the same kind of formula that they’re doing for Ibrahimovic, which is a loan deal with the option to buy at the end of the season. Latest reports also suggested that the Rossoneri’s representatives are already flying to Manchester in order to finish the deal.

Surely adding Robinho to Milan squad would definitely make the Rossoneri much more stronger on paper, however it would still be interesting to see whether that can be transformed in the field of play considering the amount of talent and ego’s at stake. Should the former Santos player were to join the fashion capital side, he will definitely face a competition with Ibrahimovic, Pato and Ronaldinho for a starting spot up front.

The only possible way for Milan to take Robinho is if they can convince him to play as a rotation player on the squad along with the other striking force, as it’s very unlikely that Massimiliano Allegri would just play four attackers in his formation. Should this is the scenario that the Rossoneri have than, the Brazilian stars’ arrival would be an excellent addition to the squad.