Milan and Inter Dreaming of Schweinsteiger 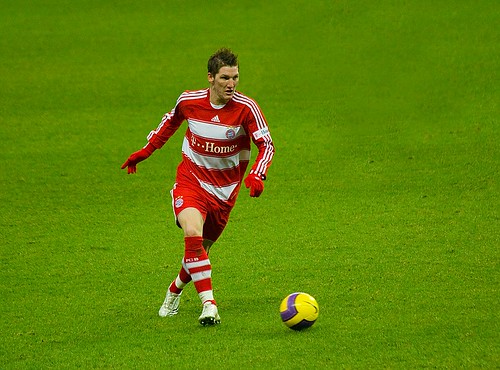 The 2010 World Cup has been the stage for some players to achieve higher stardom status and getting more interest from other clubs, that pretty much what happens to Bayern Muenchen’s midfielder, Bastian Schweinsteiger. After another exciting performance in South Africa, Schweinsteigger has once again attract the interest of two Milan clubs, Ac Milan and Inter Milan, who if my memories are correct have also set eyes couple of years back right after the 2006 WC.

Back then, young Schweinsteiger still plays as a winger which probably temporary lost both clubs attraction on him, however this year the player holds a very different position on the German national team as he plays in the center of the midfield organizing and orchestrating the teams’ movement. This new role that he plays, was the result of his recent way of playing at Bayern, where he and Mark Van Bommel partnered to hold the Bundesliga champion’s midfield.

The maturity and versatility of the 25-years-old player has now caught the eye of Milan’s Vice President, Adriano Galliani and also Inter’s president Massimo Moratti. At a latest Interview it was Galliani how publicly stated his admiration for the German player, stating that Schweinsteiger is the best player at the tournament.

“At the World Cup Schweinsteiger has impressed me the most, Galliani said to the press.

However, as much as the interest from Milan or Inter, it would be difficult to snatch the midfielder from Bayern as Schweinsteiger has been such an important player for the German giants. Reports claim that the Bavarian would at the very least request around 25 million Euro for their new talisman, a figure which probably a bit to much for Milan, although Inter might don’t have a problem, still there’s no reason for FC Hollywood to sell their important player to a club that has just beat them in the Champions League final.

Up till know, it’s positive to say that Milan and Inter’s affection towards Schweinsteiger might be nothing more than just an Utopian dream as the possibilities of signing the German star are very slim. However, should the player ask my advice, I would say that Milan would be the better place for him as the Rossoneri needs his qualities more than the Nerazzuri, that already possessed lots of quality on their midfield.