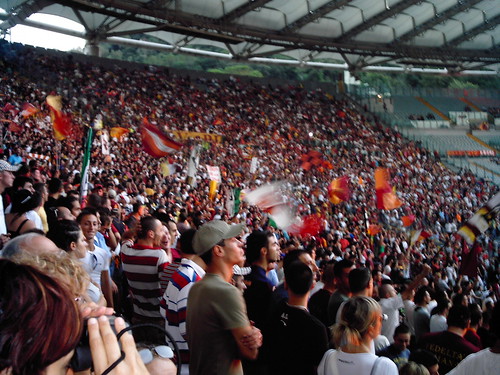 As Roma proved that they are truly on the rise as following some good results in Serie A, the capital club picked up an important three point in the Champions League after courageously beating Bayer Munich at Olympico.

The Giallorossi were forced to get their victory the hard way as they found themselves 2-0 down in the first half only to turn the tie in the second period with Francesco Totti netting the winner from the penalty spot.

Needing a win to keep their chances in qualifying from the group alive, Roma went on the attack from the first minute resulting in couple of decent chances from Marco Boriello and Mirko Vucinic. Bayern however, aren’t a team that can be taking slightly as it was their patient build up that actually earned the rewards in the first period as Mario Gomez scored two goals in the space of five minutes to gift his team a healthy 2-0 lead going into the dressing room.

Despite going two goals down in the first half, Roma never gave up as they started the second half with a courageous spirit and fortunately managed to get an early reward as Borriello pulled one back after just four minutes into the second period. The early goal lift the home team’s spirit even more as they poured forward with more precision making the Bayern’s defense looked awkward at times leaving plenty spaces for the Giallorossi at times.

After missing few good chances to equalize, Daniele De Rossi finally scored the goal that Roma truly deserved in the second half, the Italian international successfully tapped in Riise’s squared ball beating Bayern’s keeper, Kraft, without much problem. The equalizing goals really puts the Giallorossi’s confidence flying high as they went on to look for the third and winning goal. It doesn’t take long for them to get it as three minutes after the second goal from Totti’s spot kick, which was given after Borriello was brought down in the area by the German team’s keeper.

Although the famous victory hasn’t ensured Roma’s place in the knock out stage of the Champions League, the win at least kept the capital club’s position as the group’s runners up behind Bayern that still lead the table. Moreover, the mighty come back could also provide much more spirit to the Giallorossi’s game in the next up coming games especially in the last group game against CFR Cluj on December 8.