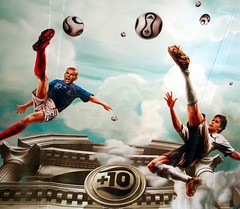 Germany just lost its captain.  Michael Ballack played in the FA Cup final for Chelsea this weekend in a 4-0 beatdown of Portsmouth.  However, if you’ve seen the photographs, Kevin Boateng–I hate the hyphenation in his name–crushed Ballack’s foot in a pretty hideous-looking tackle while Portsmouth was getting destroyed and now Germany has no captain.

I guess the worst part is that he actually sustained an ankle injury while Boateng was stepping on his foot.  Um, ouch!

“National team captain Michael Ballack is out of the 2010 World Cup in South Africa. This is the result of an MRI on Monday morning in Munich.  A tear of the medial collateral ligament of the right ankle was found. The right ankle is immobilised in a plaster. He will have to wear a special shoe for two weeks.”

“After the diagnosis of national team doctor Hans-Wilhelm Muller-Wohlfahrt today, a complete healing of the injury is expected. Ballack’s return to training is possible at the earliest in eight weeks.”

Then Ballack thought it was a pretty bad tackle himself:

“It wasn’t a good tackle.  I’ve seen it on TV and it didn’t look a good tackle and when I was on the pitch, I knew it would be really difficult to carry on. I tried, but it wasn’t possible. I’ve had a few injuries and if you can’t carry on, that’s always a bad sign. Sometimes it’s bruising or sometimes it’s a nerve that stops you.”

“You could see when they started putting in a few hard tackles and didn’t get a yellow card, they will carry on. I don’t want to blame the Portsmouth players, but they were given the chance to play hard against us. But if it gets to the point where players are getting bad injuries, then it has to be stopped.”

“If I was on the Portsmouth bench, I would have told them to play hard. There were a few tackles on [Nicolas] Anelka and there was no yellow card. There was another one by Michael Brownon [Frank] Lampard and from that, you can see they just want to kick players. So if you don’t give them a yellow card, you can’t stop them, so they carry on.”