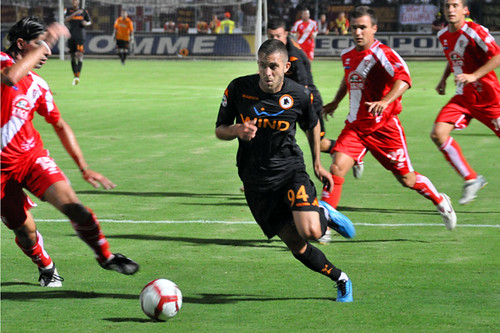 As Roma seem to have move away from their early season mini crisis as they started to fly high in the league table reaching the 5th spot after hitting the relegation zone not so long ago.

Among many important actors that helped their current improvement, one name that has been highly praised by many football fans and Roma’s coach, Claudio Ranieri, is the club’s talented French playmaker, Jeremy Menez.

Having already experiencing Italian football for more than two seasons now, the Frenchman has started to mature and proving his worth as a future star in Serie A. The 23-years-old, who was criticized a lot during his first season in the Italian league, has now turned into an inspirational player that can lift his team’s performance at times with his individual brilliance.

Acknowledging the attention that has been placed on his performances lately, Menez revealed that one of the reasons hi has improved a lot this season is because he is felling much more comfortable at Roma compared to his first season in the capital city. The young playmaker also stated that the fact he has already learned to speak Italian language this days also plays an important part in his adaptation in playing for the Giallorossi.

“I feel at home here. I’m very calm because I feel I’m finally on the right path even if I know that I have done nothing yet,” Menez stated. “When I arrived I could only speak French. Now everything is much easier,”

The 23-years-old also added that despite he has already shown plenty on improvement this season, he still believes that he can still grow into a better player in the future especially since he is still very young. Menez promised that he won’t stop working hard to finally reach his full potential as a talented footballer that could turned into a world class act in the coming future.