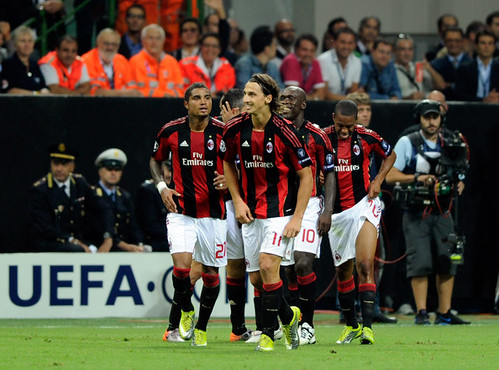 Zlatan Ibrahimovic’s arrival at Milan last summer has turned out to be an important signing that managed to turn over lots of things including previous critics about the character of the former Barcelona player.

One of the strongest critics about Ibra’s style of play came out early in the season, as Arrigo Sacchi claimed that although the big Swede can help the Rossoneri, the striker is more of an individual act rather than a team player.

However, that stereotype has changed lately since the player has really showed that he can be more than just a great individual act but is also ready to sacrifice everything for his teammates. This newfound maturity has now been finally acknowledged by Sacchi, who has even claimed that with his recent performance, the Sweden international is as good and important as Marco Van Basten for the Milan team that the veteran tactician’s coached back in late 80’s to early 90’s.

“I don’t believe it’s right to judge whether Ibra or Marco is better, However, I must recognise that the actual Ibra is not worth any less. Marco was perhaps more elegant and until this year more capable [than Ibra] of linking with the team,” Sacchi wrote in his coloumn. “bra hadn’t always showed continuity and the ability to move himself with and for the team across the entire pitch until this season.”

The 64-years-old also added that if Ibra can continue the kind of performance that he has been consistently showing with Milan in the past few games, the Swede can also achieved all of the individual accomplishment that Van Basten ever had with Milan. The former Rossoneri’s legendary tactician also blatantly admitted that this season, Ibrahimovic has turned from an individual actor into a complete player that can worked with and for the team.

“He collaborates in defense, and in attack he doesn’t just exploit his technical and physical potential, but moves in the time that the team wishes. If he keeps going this way, Ibra will equal Van Basten in international victories and individual achievements,” Sacchi wrote. “Marco won three Ballon d’Or awards. Ibra has matured and has transformed from a soloist into a complete footballer.”

Getting to make a legend like Sacchi changed his thought has already proved the changes that happened to Ibrahimovic, the way he brings himself in the field, sacrificing and working well with his teammates have become such as common scenes that happened recently. In every matches, the Swede international has grown into a much more team player with extraordinary individual qualities rather than the opposite.

Looking at the trend that Milan are having, there’s no question that the understanding between their players will improve even more in the future and with the likes of Alexandre Pato is still in the mix, the potential of Rossoneri’s attacking play would be devastating. Considering the maturity of Ibra’s playing lately, the earlier issues between his combination with Pato upfront could probably be fixed as soon as the Brazilian youngster return from injury. It would be interesting to see how much can the fashion capital side maximize the potential that their team had, as if they can worked things out, the Italian giant could actually be among one the top sides to beat in Europe.