Mascherano set to stay at Anfield

by Andreas Vassiliades on August 9, 2010 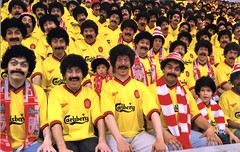 Javier Mascherano now appears likely to stay at Anfield. The Argentinian defensive midfielder has not suddenly had a change of heart, there was no dramatic last minute reverse to his earlier plea to leave. Javier Mascherano is set to stay at Liverpool Football Club because of money, or more appropriately the lack of it.

The proposed deal, Mascherano to Internazionale Milan, was dependant on another deal, Maicon from Internazionale Milan moving to Real Madrid, but because the Maicon deal was today announced as dead in the water it means Internazionale Milan no longer have the finances to support a move for Mascherano. The money received from selling Maicon was going to be swiftly redirected to purchasing Mascherano. As it turns out, probably, neither Mascherano or Maicon will now be leaving. Massimo Morrati, the Internazionale Milan President, has said pretty much said as much himself. The Italian was quoted in an Italian newspaper today as declaring ‘right now, we are unable to finance a transfer of this magnitude’. Long gone are the days when Massimo Morrati would bankroll the club. He now insists on a balanced budget and a more austere, sensible approach to transfers. This turns out be a little unfortunate for Javier Mascherano who now appears set to stay at Liverpool. Mascherano has made clear his intention all summer, he wanted to leave for a big team in the Champions League who had a decent chance of winning their own domestic title.

Liverpool are not in the Champions League and a sustained challenge for the Premiership title appears a little way off to most commentators, although not necessarily this one. Liverpool’s negotiations for Christian Poulsen, the Danish central midfielder currently employed by Juventus, are now likely to end too. The player, who was set to be Javier Mascherano’s replacement in the Liverpool midfield, is now likely to stay at Juventus.

This debacle is typical of this summers transfer happenings. Plenty of stories, suggestions and even actual bids but with little consequential substance. Liverpool will begin the new season as they were. The star players, Pepe Reina, Jamie Carragher, Javier Mascherano, Steven Gerrard and Fernando Torres are all staying. Joe Cole has even joined the ranks. Things are not entirely picturesque for Liveprool off the pitch but on it the current squad suggests it can offer plenty.