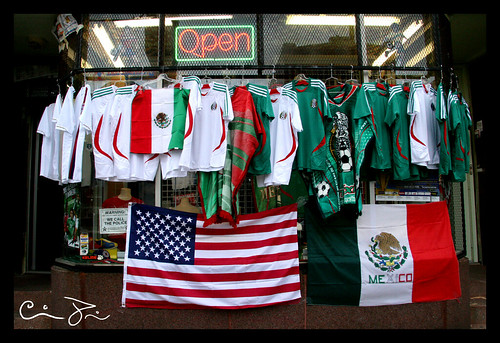 Rafael Marquez, the former Barcelona center back, has signed on with the New York Red Bulls just one day after being released from his contract by the La Liga giants.  And Marquez will join Henry in New York in very similar circumstances.  Both men irregularly played for the treble winners last season and both are considered to be in the later stages of their careers.

Rafael has shown on the club and international level that he is one of the world’s top players. He has been a winner at all levels and illustrated that he is a leader both on and off the field. We are thrilled that he decided to come to the Red Bulls at this time in his career.

I always find that final word phrase to be a bit silly.  “At this time in his career” sounds to me much like “you don’t look that out of shape” or “you’re not that old”, but regardless Marquez still should have at least a few solid years left in his career and the guy does have plenty he can teach the Red Bulls squad considering he played in over 240 matches for Barcelona.

And Marquez is excited about his future in New York and the following quote was posted on the New York Red Bulls official website:

I’m very excited to be joining the Red Bulls.

Despite having the opportunity to fulfil my contract with Barcelona, coming to New York and playing in Major League Soccer was a chance that I could not refuse. I’m completely committed to doing my very best to help the Red Bulls in the play-off push this year and to compete for championships in the years to come.