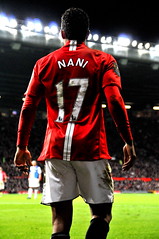 Nani scored in injury time to give Manchester United a 3-2 win over Manchester City in the Community Shield. United fell behind 2-0 at half-time and then ripped City to shreds in a brilliant second half display.

United started well having a lot of good possession without creating any clear-cut scoring chances. So it was against the run of play when off Silva’s free kick, Joleon Lescott got ahead of Rio Ferdinand to head home in the 38th minute.

If that was a soft goal to concede from United’s standpoint the second was downright terrible. Vidic left Dzeko shoot from 35 yards and somehow hislow shot beat De Gea. Not a good moment for the United goalkeeper. But a confidence building goal for Dzeko.

For the second half Fergie took off Rio, Vidic and Carrick, putting on Jones, Evans and Cleverly and what an impact the kids had. Cleverly bossed the midfield just like they did a week ago against Barcelona and United started to put City under the cosh.

No surprise the when United pulled one back after 52 minutes. An Ashley Young free kick was headed home by Smalling. Six minutes later United scored probably the best goal scored at the new Wembley. Passes rippled between Rooney, Cleverly and Nani before Nani clipped the ball into the net for the first of his two goals. It was mesmerizing football. The sort of goal that you would expect from Barcelona or Spain.

City were really disappointing in the second half. Toure, De Jong and Milner could not get control of the ball and so the City defense got no rest from the United attacks. Mancini brought on Barry for Balotelli in an attempt to add an extra body in midfield, but nothing he tried worked.

Then will penalties looming, a City corner was cleared to the half-way line. As Kompany took too much time with his clearance, Nani charged it down and ran clear from the half-way line, taking the ball round Joe Hart to score.

It is easy to get carried away with preseason games but this match had the feeling of something a lot more important than a friendly. United threw down a marker to the rest of their Premier League rivals that they will not be giving up their title without a major fight. What has to worry United’s title contenders is that the oldest United player in the second half was 25. The team’s average age was around 23. Fergie has quietly put together an impressive group of kids at United that will be challenging for titles for the next six or seven years