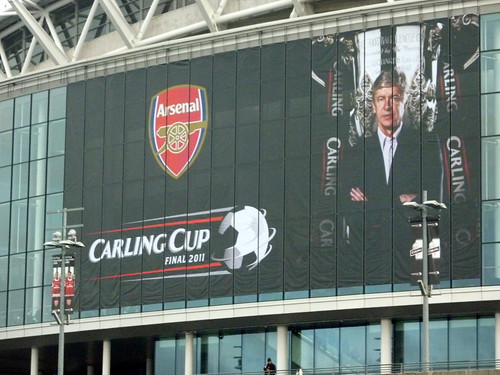 Most of the premier league sides acquired positive results in their Carling Cup campaign on Tuesday night, but a colorful results emerged from the top names playing on the day as Manchester United, Arsenal and Newcastle all picked up a victory, while the opposite happened to Tottenham Hotspurs.

Man United easily dismantling Leeds United by 3-0, Arsenal saved their blushes with a 3-1 victory over Shrewsbury and Newcastle united edging Nottingham Forest 4-3, while Spurs was a bit unfortunate to go out after losing a penalty shoot out against fellow premiership team, Stoke City.

At Elland Road, a what previously being predicted as difficult encounter for Sir Alex Ferguson’s side turned out to be an easy ride instead as the home team saw two United’s veteran stars, Michael Owen and Ryan Giggs, scoring the goals. Owen started the three goals parade after only 15 minutes after the striker received a square pass from Park-Ji Sung before easily slotting the ball home from 12 yards out.

The former England national team star added his second on the half hour, this time the veteran scored from just outside of the area after receiving a nice pass from Mame Diouf’s pass. United simply sealed the game before half time as Giggs’ bended a lovely curler with the outside of his left foot just seconds before the first half whistle blown by the referee.

Having just beaten by Blackburn Rovers in the league, Arsenal left their fans in a shock for a while after their opponent, Shrewsbury, surprisingly took the lead after 16 minutes through James Collins. The home team needed 15 minutes to get the equalizer as it was Kieran Gibbs who netted for the Gunners’ after meeting Carl Jenkison’s cross, that goal calmed down some the fans nerves, who were obviously getting worried already with their team’s performance.

Things finally got better for Arsene Wenger’s team after an hour of the game as new signing, Alex Oxlade-Chamberlain grabbed the Gunners’ second of the match, before another summer arrival, Yossi Benayoun sealed the match for his new club. The Israel international player scored with a measured finish 12 minutes before the final whistle, earning Wenger’s team an important morale boosting result after their poor start in the premier league.

Meanwhile, Newcastle United have to thank their defender, Fabricio Coloccini, who scored in the last minute of second half extra time and simply ending the thrilling encounter which saw the full 90 minutes ended in 2-2 draw before both teams made it 3-3 until Coloccini decide the result. Newcastle scored through Peter Loverkrans double in the 90 minutes and also Danny Simpson’s striker in the first half of extra time. Meanwhile, Forest got back three times with goals from Robbie Findley, Matt Derbyshire and Marcus Tudgay.

Spurs, who started to regain their form in the league, failed to advance from the Carling Cup after being defeated by Stoke City 7-6 in the penalty shot out after both teams ended their 90 minute clash plus extra time in a 0-0 draw. The Lilywhites’ debutant, Massimo Luongo, was the culprit of Harry Redknapp team’s failure in the shoot out after the player failed to convert the decisive penalty, forcing the London outfit to crash out very from the cup.