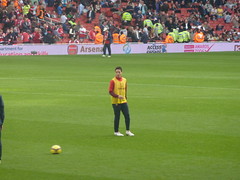 The Samir Nasri transfer saga is finally over as Arsenal have sold him to title rivals Manchester City for a reported £24m.

A statement on the Arsenal web site said:

Arsenal can confirm that they have agreed terms for Samir Nasri to move to Manchester City.

The 24-year-old midfielder, who has spent three years with the Gunners, has been omitted from Arsenal’s squad which flies to Udinese this afternoon and instead will travel north for a medical.

The move will be subject to Nasri passing a medical and formal registration processes.

From a financial standpoint is it a good piece of business by Arsenal. To get £24m for a player who has less than one year left on his contract is almost unheard of. From a playing perspective, the Nasri transfer combined with the Fabregas transfer, leaves the Gunners with a lot of cash and two gaping holes in the middle of the park. With the transfer window closing in just over a week, can Arsene Wenger bring in players to replace Nasri and Fabregas? And even if he does, will it be too late as Arsenal could be out of the Champions League and title race by then.

But a midfield of Nasri, De Jong, Toure and Silva will be difficult for more teams in Europe, never mind the Premier League, to cope with. Such is the depth at City that on the bench they would have Johnson, Milner, Barry who are all England internationals!