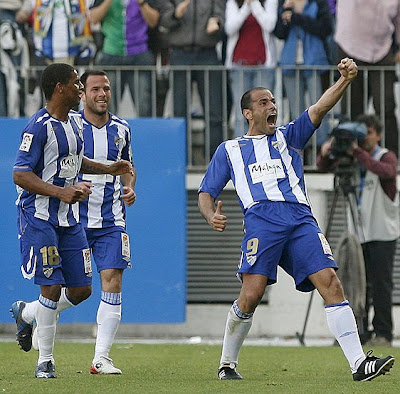 Two of the worst teams that survived the top tier of La Liga last season faced off yesterday in what was expected to be a low scoring match, but the result was anything but what was expected. Malaga finished in 17th place last season and second year top level club Real Zaragoza were pleased with a 14th place result. But neither team scored consistently over the 2009/2010 campaign, but both sides did have mediocre defenses at best during the year.

Well this season the race against last place began last week for the two lowly sides and they put on one of the best shows we will see this season. Malaga scored five goals in the match and Zaragoza, in a losing effort, managed to score three. Five of the scores would come in the first 34 minutes of action and four of the goals would come from the same two Malaga players.

Fernando Fernandez and Juanmi put the Malaga side up 2-0 in the opening seven minutes of the match, then the exact same two footballers both scored again within the first 30 minutes of the match. Former EPL man Owusu-Abeyie would score a fifth goal within minutes of the first four scored by the other two men. The 5-0 result would prove to be too much for Real Zaragoza to handle although the squad did keep things interesting.

Zaragoza, down 5-0 before the end of the first half, did break the streak with a fantastic goal from former Brazilian national team man Edmilson. Edmilson drilled a 30 yard goal before the half giving his Zaragoza side at least a ray of hope for the second half. Down 5-1 in the second half, last year’s new boys kept it interesting with two scores from Marco Perez and Ander Herrera, but the visiting side could not manage to get the score any closer and the result ended 5-3 in favor of Malaga.

The 4-0 start for last year’s lowly side (with just 28 minutes run off of the clock) proved to be too much for Zaragoza to overcome. But the match proved that even two unpopular sides can create the most fascinating match of the weekend in La Liga.