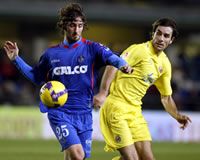 Let’s take a look at some of the biggest La Liga matches of the week:

Things are looking up for Messi’s club as they trounced Real Madrid in el clasico and now have sole possession of first place in the league with a two point edge over a more injury-plagued Real Madrid. This weekend they will have the good fortune of home field advantage on their side and they will be playing one of the league’s nicest surprises in 6th place Real Sociedad.

9th place Getafe will host 3rd place Villarreal in a match of two of the league’s more exciting offenses. Getafe did lose Roberto Soldado this off season, but the club does have plenty of firepower despite the loss. Rossi and the Yellow Submarines have been one of the most pleasant surprises in La Liga this season and Rossi is proving to be an elite forward with his consistent play this season. I like the Yellow Submarines to win yet again despite being on the road.

Deportivo has been one of the league’s more disappointing teams with 12th place results despite competing for the top four last season. Atletico Madrid can relate with their own mediocre results of late and 8th place results at the moment, but this weekend will give one of the two reeling teams a chance to turn it around and in the process it will further add on to the problems of the other team.

Sevilla just might be the most disappointing team in all of La Liga this season with 10t place results heading into this weekend, but things should turn around soon with a healthier Fabiano and a fortunate match-up with Almeria. The new boys look to be extinct by the end of the season with 19th place results so far this season and only one win this season coming in late September.