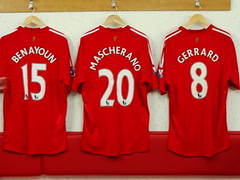 Liverpool have agreed to sell Javier Mascherano to Barcelona for a fee rumoured to be £18 million.

Almost immediately after the deal was announced rumours started to surface in reputable places that Raul Meireles, of Porto, is close to signing as a replacement for around £10.7 million. The 27 year old Portuguese international midfielder has similar tenacious tough tackling qualities to the Argentinian he is replacing but offers more offensively. Meireles is evidently not as capable by comparison as a holding midfielder, Mascherano is after all perhaps the best in the world at that role, but the added goal threat he offers will help Liverpool in a different way.

Some of the rest of the money received from the Mascherano sale is likely to be used on Paul Konchesky, close to £5 million of it in fact. Konchesky is a capable, technically impressive, left back. His arrival is only likely to push Emilio Insua, the other left back at the club, closer to the exit. A month previously Insua, an Argentinian, was close to signing for Fiorentina for £5 million but the deal collapsed at the last moment. In the space of a week Liverpool will have sold Mascherano, loaned out Alberto Aquilani (with a view to a permanent transfer) and probably Insua too. Liverpool will also have signed Konchesky and Meireles. Considering there have been other deals this summer, Yossi Benayoun and Alberto Riera have left whilst Joe Cole and Milan Jovanovic have arrived, Liverpool are likely to end up as one of the busiest clubs involved in the transfer market this summer.

Barcelona will believe that the deal they have negotiated to sign Mascherano is in their favour, not Liverpool’s. Roy Hodgson has effectively admitted as much, stressing his disappointment in Mascherano’s professionalism, or lack of it, in forcing through the move against the club’s interests. Liverpool were quite prepared to sell Mascherano but were asking him to consider the fact that nobody was meeting a fair asking price they had set. Mascherano, apparently, forced through the move by indicating that he was prepared to continue the stance he began a week previously against Manchester City, refusing to play. Liverpool fans will inevitably be disappointed, not just because they have lost a world class performer but because the club have failed to realise a profit on the player.

Mascherano was signed for a fee of around £18 million from West Ham after struggling to settle in European football, often failing to get into the West Ham team. Within a season at Liverpool he had transformed himself into a formidable midfielder, recognised as one of the best holding midfielder players in Europe. By the end of the following season it was considered that in his position he had no peers. Quite how his value has stagnated considering his progress is a mystery. Or perhaps not. Maybe Liverpool are just on the wrong side of a really good deal. Either way, Mascherano is now a Barcelona player, providing he passes the routine medical.