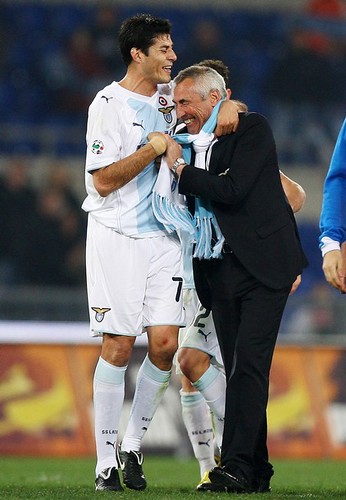 Lazio picked up another win in the league last weekend, a precious 2-0 away victory against Bologna, something that dragged the Biancocelesti temporarily sitting in the second place behind league leader, Udinese.

This current standing once again lauded the capital club’s chances in challenging for the Scudetto, but their coach, Edy Reja, apparently isn’t keen on talking about it at the moment as he prefers to wait until halfway stage before commenting about title chances.

Lazio’s failure to keep their strong start in previous season becomes Reja’s reasoning in rejecting the early Scudetto talk especially seeing that the points between clubs in Serie A are very tight at the start of this season. The veteran tactician obviously doesn’t want to get everyone excited as just yet since anything could still happen until the final month of the league, especially seeing that many strong teams are starting to find their rhythm at the moment.

“Can we win the Scudetto? Italian football is very difficult, as don’t forget last season we got off to a very strong start too,” said Reja. “We will keep working hard, then wait and see how the table looks at the halfway stage to understand what level we’re at, but without setting objectives.”

One of the fear for Lazio fans regarding their team’s chance in competing with other big clubs in the Scudetto challenge is obviously the squad depth that the capital side’s have, something that was pretty much visible last season. Answering this matter, Reja revealed that this season the Biancocelesti have made an improvement in that department so the coach isn’t that worried especially knowing that in the upcoming midweek match, he will be without several important players such as Hernanes and Matuzalem who both got injured on the weekend match against Bologna.

Hernanes has a swollen ankle and Matuzalem went off with muscular problems. I’ll have to invent something for the next game, but I can say the squad is able to cover these issues,” Reja added.

After many experts keeps on inserting several names outside of the regular top teams into the Scudetto candidates, it would obviously interesting to see would Lazio eventually arrived in that category this season. Consistency is something that the capital club needs to improve if they are trying to get into the mix of the Serie A title challenge which mostly will still involved Ac Milan, Juventus, Napoli or even Inter Milan in the end.