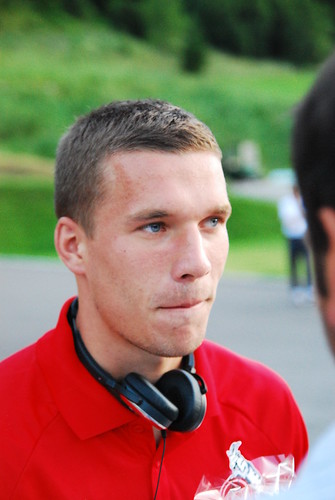 The pretty fine debut that Miroslav Klose currently had with Lazio apparently encouraged the Italian side to set their upcoming transfer target on another German forward as reports claimed that Lukas Podolksi is the club’s next target.

Podolski’s fine partnership with Klose for their national team reportedly becomes the Biancoceleste’s main reasons in trying to acquire the FC Koln’s forward, who could be targeted as soon as this January.

Reports also said that Lazio might really have a big shot at landing Podolski as having Klose would be one of the main bait that could easily lure Poldi in coming to the Italian capital. Not only that, the latest rumors saying that the Fc Koln striker isn’t that keen on renewing his contract, which is set to expire in 2013, with the Bundesliga outfit.

Should the rumors stating that Podolski isn’t really keen on renewing his deal, than the Biancocelesti would try to start their bid this January as the capital club apparently wants to enforce their squad so it can be more competitive in Serie A. Podolski, who has the ability to play as a central attacker or a wide forward, obviously possessed all the technical qualities which on paper will suit Lazio’s tactics under Edy Reja.

However, one thing that Lazio must be considering about Podolski is about his failure to perform consistently well at club level especially with the fact he didn’t really make it at Bayern Munich few seasons ago. Many experts have been criticizing Poldi, because of his inability to reprise his national team performances at club level, which is why the striker decides to return at Koln, right after his spell with Bayern didn’t worked out that well.