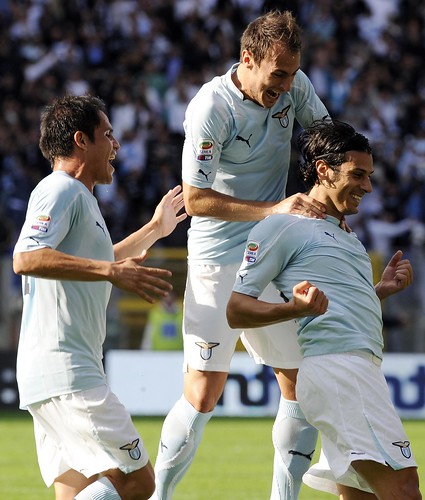 Lazio continue their reign in the Italian Serie A table after successfully grabbing a 2-1 victory against their opponent Cagliari this Sunday at Olympico, Roma.

Two latest Italian international, Stefano Mauri and Sergio Floccari were the ones responsible for the Aquile success by scoring the goals that take the capital club 2-0 for a while before Alessandro Matri pulled one back to make the match more interesting.

Surprisingly leading the table ahead of the match, Lazio players are feeling very confident in taking another three point against the struggling Cagliari that are playing without Daniele Conti, Francesco Pisano and Daniele Ragatzu. Despite have been in a poor form lately, the away team did cost plenty of problems for the home team especially from the talented midfielder, Andrea Lazzari and former Milan youth striker, Alessandro Matri.

Despite Cagliari’s early pressure it was Lazio that take the lead first through Floccari who managed to pounce the home team’s blocked free kick in 21st minute, slamming a low right footed kick pass a host of defenders legs through the away team’s net. The opening goal gives the confidence boost that the Biancocelesti needed as soon after that they started to storm the away team’s defends with serious attacking threat notably led by Hernanes and Mauri.

After creating some decent opportunities, the Aquile finally managed to score their second goal after Mauri luckily turn in a cross with his chest into Cagliari’s net. However, instead making life easier for Lazio, the second goal turned out to be the trigger the away team to show their potential as soon after that, Matri pulled a goal back for the Sardinian side.

After series of heart stopping moments in front of their goal, Lazio finally take home the three point and continue their amazing spell in top of Serie A for at least another week regardless the results reached by other teams below him. A tougher task already awaits the Biancocelesti next weekend as they will be challenging one of the most talented team in the league, Palermo, that are still looking to their consistency this season.