Krasic To Get Punish For A Dive Against Bologna? 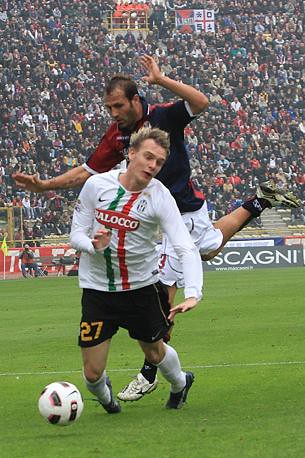 Another negative news emerged for Juventus just after their draw against Bologna last Sunday as after the report of another injury for Carvalho Amauri, there’s a chance that the Bianconeri might be loosing another player for their next few matches due to a misconduct.

The player that Juve could be missing for the games against Ac Milan and Cesena in the next few weeks is their new talisman, Milos Krasic, who was being accused of unsporting conduct after committing a dive last Sunday.

The Serbian winger looked to go down very easily despite there wasn’t any contact in the Bologna box and actually received a penalty kick for his team because of that act. Fortunately, Justice seems to served Alberto Mallesani’s side well as Vincenzo Iaquinta failed to convert the dubious penalty as his shot was easily saved by Emiliano Viviano.

However, despite the penalty doesn’t actually give any advantage for Juve, reports in Italy stated that the Serie A’s disciplinary commission have decided to investigate Krasic’s action as if that was proven to be a blatant dive, the player could be facing the ban mentioned above. According to the news, should the Serbian winger is found guilty of unsporting conduct, the commission will punished him based on the the 35.1 rule that is handing a two match banned for an unsportsmanlike behaviour on the pitch

It’s a very interesting case as seeing from the video evidence the penalty call was pretty much a dubious one since the Bologna player hardly touch Krasich and seems pretty much was trying to pull out his legs from the Serbian winger. So far, there hasn’t been any statement made by the player himself regarding whether his doing that action on purpose or not, most of the recent defensive comments comes from Juve’s coach, Luigi Del Neri and director, Beppe Marotta.

The case itself becomes a big fuss probably since previously there have been plenty protest against bad refereeing decisions made in some of the early Serie A games by many clubs. Last month, Palermo president, Mauricio Zamparini, accused Alessandro Del Piero of commuting simulation to get the decision from the referee, now it seems that every single bad decision might definitely be considered by the Leagu’s commission.

Surely giving a punishment to Krasic, should he has been proven to commit a simulation in search of penalty kick on that game, is actually a good warning sign so that the same kind of conduct can be minimized in the future. However, off course Juventus wouldn’t at all be happy if the former CSKA Moskow man is getting the ban as he has become such a fundamental part in their game this season, loosing him especially for next week match against Milan is a big problem for them.