Krasic Set to Depart From Turin 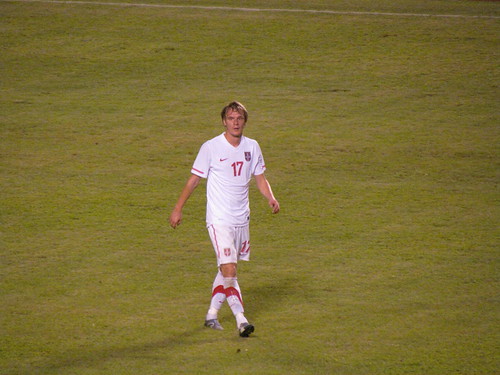 Juventus are sitting comfortably at the top of Serie A at the moment but the same condition cannot be said for some of their players, notably for Milos Krasic, who was considered as one of the Bianconeri’s most important act last season.

The Serbian winger apparently isn’t well liked by Juve’s new tactician, Antonio Conte, and according to the player’s agent, Dejan Joksimovic, a winter transfer is pretty much on the card for his client especially if the situation doesn’t change.

Joksimovic revealed that Manchester United and Manchester City actually made a bid for Krasic in the summer, but was rejected by Juventus’ management at that time, but considering the current situation a different answer might arrive this January. However, the agent isn’t really convinced whether those two clubs are still interested in signing Krasic again, but things might still occurs since the ex-CSKA Moskow player’s price might be dropping since he isn’t playing that much at the moment.

“Conte doesn’t want him anymore. Milos has to play so the best thing we can do for him now is to find a new club. Chelsea and Manchester City made bids for him in the summer, but Juve turned them down. Juventus must act quickly because while he is not playing, Krasic’s price in the market is dropping day after day. Krasic must play and in one month’s time we should have a clearer picture. We will see how the story develops from now until Christmas,” Joksimovic stated.

Furthermore, the agent also denied the possibility of Krasic going to Borussia Dortmunt just like some previous rumors linking the Serbian, who could be used by Juventus as a bargaining chip for acquiring Dortmund’s wonder kid, Mario Goetze. Joksimovic believes that his client stature at the moment would still allow the winger to play for bigger teams than the Bundesliga champions, so the agent obviously still hopes for something big before considering Dortmund.

I think Krasic is a bit bigger than Borussia at the moment,” the agent added. “These are stories without any substance

Krasic was indeed being heralded as one of Juve’s important signing last summer and overall actually had a pretty good first season with the Turin giant, but apparently Conte doesn’t really like the player’s style. The new tactician went on to pick Simone Pepe instead of the Serbian, which at first was actually pretty surprising since the Italian international had a horrible previous season with the “Old Lady”.