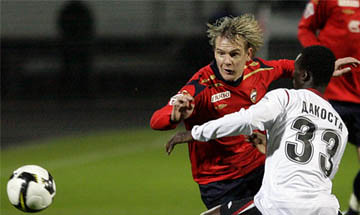 Juventus’ winger, Milos Krasic plays down the latest rumors about his potential move away from Turin as the player himself recently stated that his club are not planning to put him in the transfer market anytime soon.

However, the former CSKA Moskow player didn’t really close down a potential move as he claimed that anything could still happen when the winter transfer market opens in January or maybe later in the summer of 2012.

Krasic revealed his disappointment in not being considered an important first team player anymore this season, despite he managed to become one of Juventus’ best players in the previous season. The ex-CSKA Moscow man did confirmed that for now the Turin giant told him that his not among the transfer listed players and that’s why he will be working hard in trying to get his place back in the first team, although it’s looking really difficult indeed.

“Last season, I was considered to be indispensable, now I hardly play at all. But the club has not told me I am for sale. It’s a shame not to be a protagonist. I am here and not thinking about leaving. We’ll see if things can improve over time. It’s true that I am in a bit of a crisis, but I want to give my all in training to get back into the starting eleven,” Krasic told Italian media

However, despite playing down his exit talk, Krasic simply failed to rule out any possibilities as the player hinting that something might occurs in January or June should things doesn’t really change for him. The winger obviously is trying to take a careful step regarding his future as he doesn’t want to decide about anything yet since there’s might still be a chance for the Serbian international to get his place back in Juventus’ first team line up.