Know Your US MNT Opponent: Haiti Haiti’s proper name is “The Republic of Haiti”, sort of like our nation is styled “The United States of America”. And like our nation, it is a cultural meting pot. Haiti though is a smoldering cauldron of French-Creole-Caribbean cultures, and it is undoubtedly a nation with a heroic history. Let’s see how much you know about Haiti with a pop quiz:

Question 1 of 1: Which of the following statements about Haiti is true?

A. First post-colonial independent black-led nation in the world.

C. First (and only) nation whose independence was gained through slave rebellion.

It’s (D), of course. Haiti’s national motto is “Strength Through Unity”, and it is befitting of their soccer squad, who are capable of playing with strength due to their constant unity. Seriously, these guys are together year round because a ton of them play in the same small league in Haiti for the same teams. Meanwhile, the Yanks are starting 11 guys who have basically been thrown together. But, notice I said “capable of” playing with strength.

Their familiarity with one another helps, but it can’t stop some US attackers from running past them or some burly defenders from absolutely flattening them when they go up for a header. I just don’t think they can overcome the US attack’s physical advantage, and I hope Bob Bradley’s boys beat them soundly. Actually, I just hope they beat them.

Well, he did once give a great pre-game speech, though few are aware of it. In fact, unlike some coaches, MJ summed it all up with just two words: “Beat It” (with the “It” being Haiti). And if beating “it” helps, maybe everybody should wear a white glove and grab their crotch throughout the game. Making that crazy “heeHEE” sound is entirely optional. 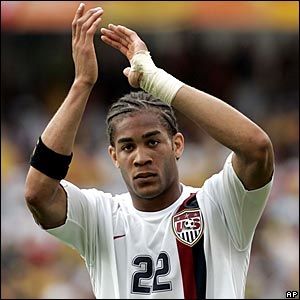 But, I think Gooch was doing all that stuff before MJ even passed.

Rest in Peace, Michael. You were one (certifiably) crazy kid, but I’ll always cherish your “I Want You Back” with the Jackson Five. I wish you had stayed small Michael for the rest of your life, like Webster.

Wouldn’t that have been sweet? And think about how much easier it would have made your love life!