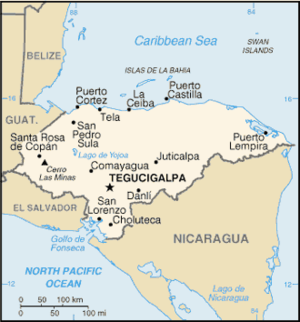 Honduras is a free republic in Central America. Hondurans are a crafty, productive people with a rich history. The Mayans first settled in the region, Chris Columbus (the explorer, not the director) set foot on its shores, and Spain controlled the country for much of its existence. The tiny nation also once fought a “Football War” with El Salvador.

A Football War? Yep, it’s true. While the war would have likely happened without the tense soccer situation, a World Cup Qualifier between the two nations did stoke up some serious acrimony on both sides.

I wouldn’t mess with Honduras either. Despite the fact that they are only a nation of 7.5 million people, Honduras has a scrappy team.

They are gifted bunch too, and they are definitely a side that sometimes gets the best of the Yanks. While I think the US will win this week, one cannot discount the skill of Los Catrachos. Amado Guevara of Toronto FC is their Captain and offensive impetus, and when he plays for his country he looks more like the MLS MVP of years ago than usual.

Other MLS players recently plying their trade for Los Catrachos are Marvin Chavez (DAL), Mauricio Castro (NER), and Roger Espinoza (KCW). Former Gals striker Carlos Pavon is also one of the best Honduran players, though he is now way past his prime.  Hopefully, the US will best their Honduran rivals and keep on track toward a WC 2010 berth.