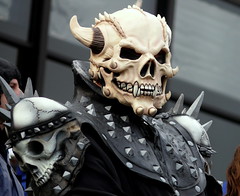 Don’t watch the highlights of the Wizards/Galaxy match if you have a weak constitution.  Kei Kamara’s miss just hurts–I’m not saying it made me sick, but I winced when I watched it.

I think this kind of miss speaks to a much greater problem in the MLS.  I’m not saying things like this don’t happen in other leagues around the world, but there’s something about American Soccer that hasn’t quite caught up to the European and Latin leagues yet.

If you look at how RSL won the MLS Cup last season they did have to go on a run, but every team they beat was SUPPOSED to beat them and they didn’t.  So there’s an element of giving away the match on the other side of every win.

Now we turn to this season and RSL just lost a match to Columbus that they probably should have won and we’re right back where we started.  There’s something about intensity or preparation that must be affecting this, but I only have one guess at an explanation.

I know the fans are much more rabid in Europe and Latin America.  Maybe if the fans got a little crazier we’d see more compelling play every night.  Think about it–wouldn’t you be more compelled to play hard if you had some crazy nutbag fans in their insane retro-warlord garb screaming at you to score or die?  I know I would.

It all goes back to expectation.  Expect more of these teams and many of them will perform on command.  It should be fun to watch and even more fun to behold the crazy fans.

This is the best video I can find of the miss