The Sexiest US WNT Players: Who’s #3? 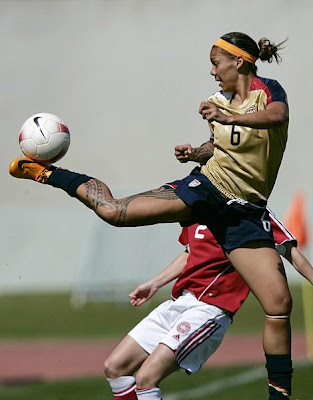 There’s something about “dangerous” ladies that make men crazy with desire. I have never been one of these men, as I usually prefer the more sweet “girl next door” types, but you can’t deny many dudes out there dig wild girls (Exhibit A: Angelina Jolie). Heck, there’s an entire industry out there now literally built around such “Girls Gone Wild”.

Natasha Kai is not a “Girl Gone Wild”. She’s no exhibititionist, but she should be as her body really is a work of art. I am not just referring to her multitude of tats (19 in all), but also her ripped abs and gorgeous figure.

This lady has many things men love: good looks, smarts, skills, an aggressive demeanor, and (of course) a completely confident attitude.

Kai is from Hawaii, but like Tiger Woods, it’s difficult to describe her heritage. I believe she’s half Chinese, half Hawaiian, half Filipino, and half Caucasian. I know what you are thinking: that’s four halfs. Well, Kai is as hot as two chicks, so she needs four halfs. She never needs four halfs to score goals though, as she is one of the squad’s best forwards. 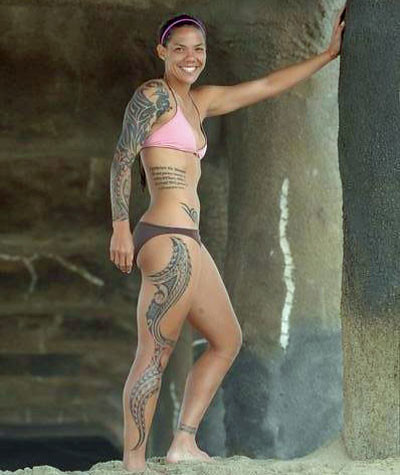 In fact, she will likely be as important to the US WNT’s future as Abby Wambach has been to its recent past. Her nose for the net reminds me of Wambach’s and I think Kai has the potential to take her game even further. She could still add some new skills. But, as you can see, she doesn’t likely need to add any more tattoos to her sexy frame.

Now, I may be getting some men out there excited about Ms. Kai, but in the spirit of full disclosure, I must tell you Natasha is apparently a lesbian. According to one report I read, she almost missed the Olympics because of a bad break-up with a girlfriend. If you’re like me, this fact makes you respect her more for being so open and brave. If you’re a perv, you’re even more turned on now picturing her getting it on with other ladies. How dare you!

Long story short, Kai is the WNT’s “dangerously sexy” gal, and I hope she scores a ton in 2009 both on the field and wherever (and with whoever) else she likes off of it.