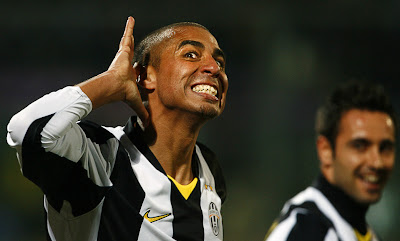 In our SATO Match of the Week, Juventus handed Lazio their first loss of the season and also reduced the number of unbeaten squads to three in Serie A competition (Juventus, Genoa, and Sampdoria all remain perfect heading into the Sunday matches).   But perhaps what was the most important issue regarding Juventus’ victory was the fact that they sealed the win on the road against a very tough opponent.

After a mild first half of offensive action, Martin Caceres would score the first goal for the legendary squad in the second half.  Then in the 90th minute David Trezeguet would remind fans of the game everywhere that the forward is in fact alive and well.  Trezeguet, who was named SATO’s Most Disappointing Player in 08/09, was able to start off his season with a critical goal.  The often rumored  transfer has expressed his desire to remain with Juve until the season plays out.  Trezeguet, who was rumored to be on the move to Milan this summer, has made it clear that Juventus is the only Italian squad that the vet wants to play for by the end of his career.   And with 90 minute goals all over his resume, Juventus doesn’t mind having the star French player.

And right now Milan could use all the help they can get.  On Saturday the former number one powerhouse continued their search for the net in a 0-0 draw against new boys Livorno.  Leonardo’s crew was able to start off the year with a victory, but after being embarrassed by Inter a few weeks back Milan needs to prove to Serie A fans that they deserve a top spot in the league table.