Just how exactly do Balotelli, Tevez, Robinho, Adebayor and Silva fit into a team? 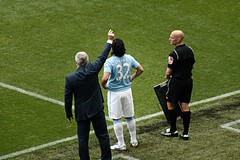 Of course, Mario Balotelli, Carlos Tevez, Robinho, Emmanuel Adebayor and David Silva are not the only ones but we are presuming that Adam Johnson, Roque Santa Cruz, Craig Bellamy, Jo, Stephen Ireland and Shaun Wright Phillips will only be substitutes, if even that. In fact, come transfer deadline day, we expect that even Manchester City will have sense to have moved a few of these players on. Roque Santa Cruz, purchased for close to £20 million, might possibly be sold for around half that price just one year later. Jo, purchased for close to £18 million, is likely to be sold for around a third of that price, just two years later. Shaun Wright Phillips, signed for £9 million, would  likely attract figures close to £6 million now. Craig Bellamy, signed for £14 million, is expected to move on for a transfer fee of about £8 million. Stephen Ireland, who signed for the club as a teenager and was Manchester City’s player of the season in 2008/2009, is seemingly unwanted by Roberto Mancini, the club manager, but the club are unlikely to receive bids of more then £10 million for him.

Whichever way you look at it, Manchester City are facing catastrophic losses when they trim down their attacking options. They cannot keep them all, new Premiership rules allowing only 25 registered players over 21 years old per squad make sure of that, and precisely because of that other clubs can push for a good bargain. Not withstanding, Manchester City have overpaid for the aforementioned players in every single case. Their resale value, bar none, is far lower than their purchase one.

However, even if Roque Santa Cruz, Craig Bellamy, Shaun Wright Phillips, Jo and Stephen Ireland were to leave, Manchester City would still have Adam Johnson, David Silva, Mario Balotelli, Carlos Tevez, Robinho and Emmanuel Adebayor fighting to be in the starting line up. Considering Roberto Mancini is only ever likely to use three of them at a time having all six of them in the squad is ideal. Six players sharing three positions is not only ideal, it is customary for big clubs. Two players for each position. The balance is quite ideal too. For the left hand side Manchester City will have the opportunity to choose, and swap, between Robinho and David Silva. On the right hand side the opportunities will fall to Mario Balotelli and Adam Johnson. In the centre, Manchester City can choose between Carlos Tevez and Emmanuel Adebayor. If they keep Roque Santa Cruz, they have a third fall back option for the centre forward position too.

The problem Roberto Mancini faces is keeping all the players happy. Being a squad player and sharing minutes with colleagues at Real Madrid or Manchester United is one thing, being asked to be a squad player at Manchester City is quite another. Robinho, for that matter, could never attach himself to the idea of playing without a guaranteed starting place at Real Madrid, how should he cope with that idea at Manchester City? Deciding which of the six to start with will not be easy and  keeping the three who are not starting satisfied and in unison with the team ethic will be even more difficult but Roberto Mancini has, in principle, the makings of a very good attack. It is there for him, now he just needs to make it work.