Joe Cole and Liverpool, a deal that suits both 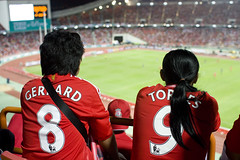 Liverpool’s finances are not in the best of shape. The club’s American owners purchased the club with the idea of developing a new stadium, increasing turnover and then selling the club on at a substantially larger price. As a consequence of the failure to develop a new stadium, plus the extra unexpected disappointment of not qualifying for the 2010/2011 Champions League campaign, the owners plans have truly fallen apart. The club has been on the market for several months now and a buyer has yet to appear. All potential buyers know Liverpool are in dire straits and are not willing to pay a premium price. With large deficits to clear and a squad that is not performing as some believe it should all potential buyers are waiting for the price to bottom out. Liverpool’s owners, on the other hand, know that if they can snatch a Champions League spot this coming season and progress towards the new stadium development their asking price can again increase.

Without much money to spend on transfers Joe Cole suits Liverpool perfectly. He is an established star, which means Liverpool do not look like they are only signing cheap players who nobody else wanted which would only damage their reputation, and was available for free. Joe Cole does have a history of injury problems but Liverpool will believe it is a gamble worth taking. Considering the new manager Roy Hodgson has created a reputation as a man capable of making players who have disappointed at other clubs excel for him, such as Danny Murphy and Bobby Zamora, this signing appears even more appropriate. It might even be enough to appease the likes of Steven Gerrard, Javier Mascherano and Fernando Torres and persuade them to stay. Liverpool are risking little with this signing, which in their current situation is about as much as they can.

For Joe Cole the transfer also offers a personal opportunity of redemption. The English golden boy, after Wayne Rooney, since he was a teenage prodigy Joe Cole has never quite managed to live up to expectations. That is not to say his career has been a disappointment, it hasn’t, but his progress at Chelsea was slow and apart from the odd brilliant goal, usually against Manchester United, he neevr truly established himself as an indispensable part of the first team. For the majority of his years there he was a fringe first team player unfavoured by Jose Mourinho, Avram Grant, Luiz Felipe Scolari, Guus Hiddink and Carlo Ancelotti. They all used him sparingly and appeared frustrated at his inability to perform on the pitch what he was obviously capable of doing on the training ground.

At Liverpool he is likely to be a regular starter, simply because of a lack of competition, and has the chance to perform as everybody has always expected him to. Joe Cole’s transfer suits both parties and promises plenty but knowing Liverpool’s recent history and Joe Cole’s consistency for frustration it all might just end in tears too.