Javier Zanetti Extends With Inter Until 2013 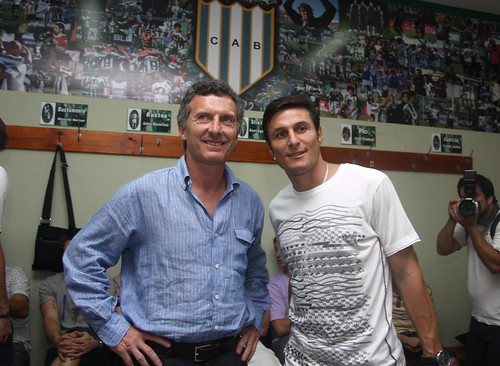 Inter Milan captain and current living legend, Javier Zanetti seem set to finish out the rest of his footballing career at San Siro after he officially signed a two years contract extension.

The new deal will allow the 37-years-old Argentian to play until 2013 and should pretty much means that he will retire as an Inter player.

This kind of approach is something that is pretty common in Italy football as not long ago Inter’s city rival, Ac Milan have just been left by their captain, Paolo Maldini, who retired with the club at the age of 40. With his current physical condition, there’s still a chance for Zanetti to follow the Milan legend’s footstep as despite of his old age, the Argentinian is one those footballers who have an amazing work ethic in and off the field.

Zanetti may looses a bit of his natural pace but his experience and hard work are still visible for the fans to see every time he plays both for Inter or Argentina’s national team. Until last season, the skipper still performed admirably and surely become one of the important actors that help Inter wins the treble.

His absentees in the World Cup is also being mentioned as one of the mistakes that Diego Maradona did in South Africa, as many thought that Zanetti’s quality and leadership could help Argentino to go further in the tournament.

Surely the extension would also bring a personal challenge for Zanetti as whether he can keep on playing in a high level for the next two years in today’s football that keeps getting faster and unfriendly for veteran players. As many know, many teams that still plays with their old players are usually criticized a lot this days as they usually can’t keep up with game’s current pace especially when they have to face a younger opponents.

This upcoming season that task could be very much visible for Zanetti as he will be leading his treble winning team to face tougher challenge with statistically an older squad from last season. Should they fail to achieve any success this season, I am sure that some people would bring up the age factor as one of the main reasons for the failure and the 37-years-old captain as one of the veterans would be the target of critics.

Aside from confirming Zanetti’s new contract, on the same day Inter also revealed that they have extended Diego Milito’s playing time with the Nerazzuri for another year. Milito reportedly will be staying at San Siro until 2014, this renewal surely ends the speculation regarding the striker’s future that was in doubt after he was rumored to be approached by Real Madrid earlier this summer.