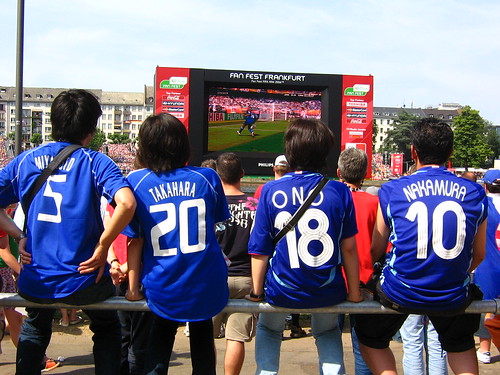 Japan had never made it to the World Cup until 1998 in France.  That first experience ended in disappointment as the Samurai Blue lost all three of their matches.  Since then they haven’t missed  a Cup though and in 2002 they even won two matches and advanced to the second round.  The squad two best feats in football history was their third place finish in the 1968 Olympics in Mexico and also they came in second place at the 2001 Confederations Cup to France.

Japan had the benefit of playing in the Asian Zone which is in my opinion the easiest division in the world to qualify.  Their final group included Australia, Bahrain, Qatar and Uzbekistan.  The Samurai Blue fared well against the three unknown squads winning four out of the six matches and drawing the other two.  Against Australia the squad struggled to a 0-1-1 result, but still advanced easily.   The club’s featured players are captain and defenseman Yuji Nakazawa and  La Liga Espanyol playmaker Shunsuke Nakamura.

Japan’s odds of winning the Cup currently range from 200 to 1 or 300 to 1.  In other words the club is not only considered a long shot to win, but they are considered the fifth least likely to hoist the Cup.  The rest of their division (Netherlands, Denmark, Cameroon) all have much better odds of taking home the title with the worst odds of winning being around 125 to 1 for Denmark.  Japan will likely not earn more than a single point this Cup.  The club couldn’t manage more than that in their two matches with Australia and this Cup they will face some stiff competition in a tough group.