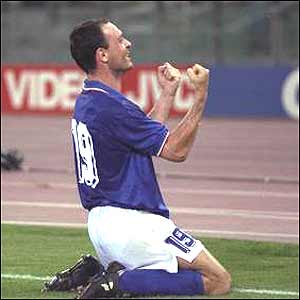 The Team: In 1990, Italy hosted the World Cup and its National Team was considered the overwhelming favorite to win the tournament. With star players like the dominant veteran  Salvatore Schillaci and the mercurial striker Roberto Baggio, all experts believed Azeglio Vicini’s side would not only win the title, but do it with style.

In addition to the two prolific scorers mentioned above, the Italian squad also featured several other legends, including Walter Zenga, Giuseppe Bergomi, Paolo Maldini, Roberto Mancini, and Roberto Donadoni. The entire roster was composed of players from seven Serie A sides, and Inter had the most representatives on the team with five.

The Tournament: Italy won all three group stage games (including one over the US) by shutouts. They also shut out their opponents in the round of 16 (Uruguay) and the quarterfinals (Ireland), and some folks thought they would never concede a goal. But, they did so in the semis against Argentina so they tied 1-1, before losing 4-3 on penalties.

In the third place match, Italy bested England by a 2-1 score to claim the Bronze Medal. At the conclusion of the tournament, Schillaci was awarded both the Golden Boot (6 goals) and the Golden Ball, but he couldn’t lead the team to the Final on home soil. Therefore, the 1990 Italian squad can only be remembered as the seventh best ever.