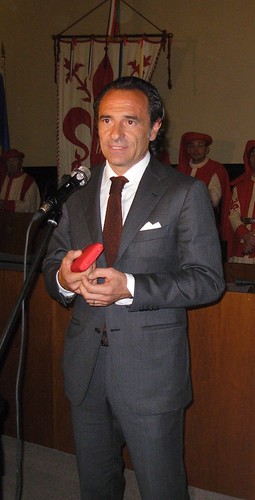 Italian national team disappoints again on their friendly game in preparation for the upcoming Euro 2012, after suffering a home defeat against USA, with Fulham’s man, Clint Dempsey scoring the only goal.

Playing with an experimental squad, Cesare Prandelli’s team actually managed to dominate the game but they just didn’t step the tempo up apart form the final 10 minutes when the were already a goal down and the visitor simply content with closing up their defense.

Without the injured Antonio Cassano, Alberto Aquilani, Giuseppe Rossi and also unfit Antonio Di Natale, Prandelli opted a rather strange starting line up by fielding Thiago Motta as a trequartista behind Sebastian Giovinco and Alessandro Mati. This setup didn’t seem to work out that effectively, although Giovinco did create lots of problem for the visitor’s defenses, but unfortunately no goals arrived from the attacking partnership.

In the second half, Prandelli made several chances, but most of them were being done after the Azzurri go a goal down from Dempsey’s strike in the 54th minute. Gli Azzurri tried to get back into the game after it but despite creating several chances they failed to put one in the net, forcing the fans in Genoa witnessing another disappointing friendly defeat from the national team.

Haven’t really been convincing on their friendly matches, the defeat against USA apparently didn’t really bother Prandelli that much as he felt that it wasn’t a deserved one and believe his players will do much better in the Euro. The tactician even hailed his players’ spirit in facing difficulties and trying to get back into the game after a goal down, but criticized their movement which wasn’t timed perfectly causing plenty offsides instead of goal scoring opportunities.

It was undeserved, but with this spirit we will certainly have a great Euro 2012, I liked the way they tried to overcome every difficulty. Obviously playing once every three months is tricky. We were more incisive after the break and raised the tempo, so yes it was an improvement. We did some interesting things, but the problem was we had the wrong timing when going on vertical lines, which is why there were so many offsides,” Prandelli said.

Of course results in friendly matches can’t be counted as the actual condition of Italy, but they will have to work harder during the tournament and simply proved Prandelli’s confidence over the them. The Azzurri will definitely hope they won’t be losing anymore important players after the potential absence of Antonio Cassano and also Giuseppe Rossi, who are suffering from a long term injury problems.