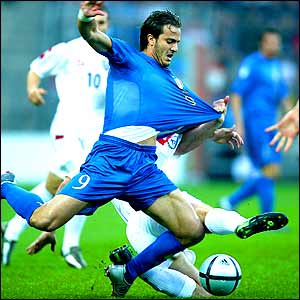 Briefing: Agent Alberto Gilardino (aka “The Gila Monster”) has performed ably for the MNT since 2004 and is poised to be one of its brightest stars during Mission 2010. Director Lippi has utlized the youngster (well, on this squad anyways) quite a bit and he has been scoring goals in droves during the team’s drive toward Africa and Mission 2010.

Special Skills: Agent Gilardino began his professional career prior to his 18th birthday and he has been a Serie A star striker ever since. He is known best for his incredible nose for the net, which has resulted in him scoring over 100 goals in Italy’s top flight despite the fact he is only 26 years old. His speed makes him a mercurial forward.

International Actions: Agent Gilardino has appeared in over 30 missions for the MNT and scored more than 10 goals. He was a key member of the Mission 2006 squad as he scored the goal that prevented the US from handing the MNT what would have been their only loss during the tournament. He has played a large role in 2010 qualifiers.

Mission: Agent Gilardino’s mission, should he decide to accept it, will simply be to put the ball past the enemy’s posts for the MNT during Mission 2010. He is not expected to play defense or provide assists, but he must notch goals for the MNT or he will likely be replaced by another striker. This message will self destruct in five seconds.