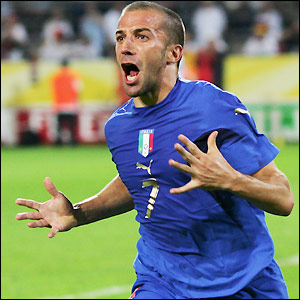 Briefing: Agent Alessandro Del Piero (aka “The Godfather”) is the longest-serving member of the MNT, receiving his first cap in 1995. His age (36) may prevent Director Lippi from selecting him for the Mission 2010 squad, but his experience and leadership could greatly assist the agency as they seek their record-tying fifth World Cup title.

Special Skills: Agent Del Piero is one of the greatest attacking midfielders ever. He also is reputed to be one of the best free kick takers in history. He’s played for Juventus since 1993 and won many trophies for that squad during his long career. He has also won several individual awards, including two Serie A MVPs. He was even named to the FIFA 100.

International Actions: Agent Del Piero was a member of Missions 1998, 2002 and 2006. While in Germany, he didn’t play as much as many expected, but when he did he performed very well. He did play during the Final and he notched one of the PKs that resulted in the title. He’s the fourth all-time leading scorer for the team, and a legend.

Mission: Agent Del Piero’s mission, should he decide to accept it (or be selected for it), will be to create goals for the MNT during Mission 2010 with his amazing vision, precision passing and disturbingly good dribbling skills. He may be the agency’s “old man”, but he is also one of its greatest talents. This message will self destruct in five seconds.