Is the Champions League group stage a waste of time? 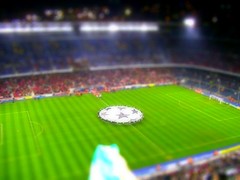 Introduced originally as a way of guaranteeing, to some degree, an extra income, besides that received from domestic competition, the group stages of the Champions League have, for the most part, been considered a success. Occasionally there has been a yearning, a semblance of nostalgia, for that which was before, namely an absolute knock out competition, from the earliest stages to the final match.

This yearning was at its most vociferous when UEFA introduced two group stages, an idea obviously intended to guarantee even more income for the traditionally big clubs. At that time there was an abundance of meaningless matches which always concluded that, more or less, the same familiar teams, for the most part, should progress to the next stage. After that was abandoned there was temporary relief, a compromise between fans and chairmen, of sorts. In recent seasons, however, there has again been a consistent call for UEFA to alter the format. The reasons are fairly obvious. The group stages only infrequently allow for excitement and the majority of matches are hum drum affairs, important in the moment but of very little significance in the greater scheme of things. If, perhaps, we were to choose today from the eight groups the two teams that would qualify for the next stage, a total of sixteen, we would probably be correct in all but a couple of instances. From the sixteen it would take a footballing novice to guess more than four incorrectly. It is so formulaic and predictable that the novelty wears thin after a couple of group games and the tension only reappears when the knock out games begin, at the same time as Spring arrives on the horizon.

In the 2008/09 edition of the competition the most surprising the group stages reached was when Panathinaikos qualified ahead of Werder Bremen in Group B along with Internazionale. In last years edition the biggest surprise was Lyon qualifying ahead of Liverpool and Bayern Munich ahead of Juventus. Hardly dramatic and unbelievable outcomes, especially considering Lyon were eventual semi-finalists and Bayern Munich runners up. Slight surprises happen, at most, and even then it is a case of only a couple per season. The group stages aren’t quite irrelevant but they are mundane, predictable and monotonous.