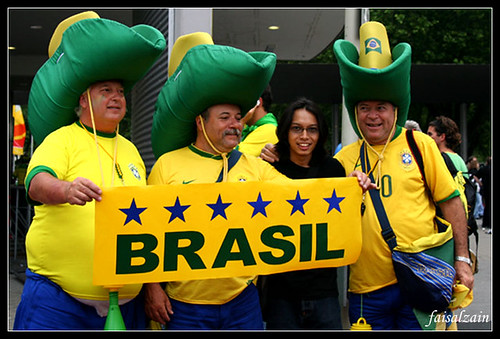 Heading into the World Cup he was considered one of the most controversial figures.  And the former national team defensive midfielder was hated by many diehard Brazilian fans way before the beginning of the tournament.  In fact the real opposition to Dunga began when he received the job four years ago.

And when Dunga signed that deal (his first head coaching contract) he knew that the only thing that mattered was 2010.  Sure the four years building up to the event is important, but the deal was made for the duration of four years for a reason.  And winning it all would be the only acceptable way to continue on as coach.

But did Dunga’s bull-headed tactics write his own destiny?  Was the coach’s refusal to cater to stars part of the reason why he is likely done as national team coach?  Did Dunga’s preference of hard working defensive minded players to the likes of superstars cost him what so many expected the nation to win?  If Ronaldinho, Adriano, Diego, and Pato were around would things have ended differently?  Did Dunga cost his country a chance of winning it all?

Twenty four hours ago nearly everyone watching the World Cup was quietly thinking to themselves, “Oh my god.  The guy might have it all right.  Maybe he isn’t an idiot after all.” But it’s amazing how much can change in one day in sports.

To be honest Brazil was one of the most impressive teams this tournament and they suffered the bad luck of a really tough quarterfinals draw.  The team could have attacked more and they could have won the big matches that they are expected to, but heading into halftime yesterday, Dunga and his job security wasn’t even on my mind.  The coach had two bad breaks in the second half though and sometimes thats just the way the ball bounces.

Dunga is likely done though.  And history probably will not paint a pretty picture of a man that was so close to proving all the critics wrong, but rigid in his tactical ways.  But at the end of the day all that we can say is, “Well I guess he should of picked Ronaldinho.”