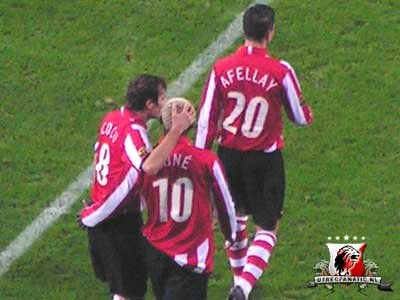 After battling themselves in the latest Serie A fixtures couple of weeks back, two Italian giants, Inter Milan and Juventus looks set to continue their duel but this time it won’t be in the football field.

The battle that the two clubs are going to do is in acquiring the service on talented Holland and PSV Eindhoven midfielder, Ibrahim Afellay, who has been catching the eyes of many football fans lately.

Afellay’s latest magic was shown on Tuesday, October 12 at his country’s European Cup qualifying round against Sweden which was won by the Netherlands 4-1 with Afellay scoring two goals and getting one assist for Klaas Jan Huntelaar. Aside from the goals and assist, the PSV captain’s performance that night was superior indeed as the 24-years-old bosses the midfield alongside Wesley Sneijder and Rafael Van Der Vaart.

“I have to admit, it was my best game,” Afellay said about his performance against Sweden.

With his contract set to end next summer, the midfielder surely become a most wanted player in the market as he looks very prepared to take a further step in his footballing career. Normally should PSV fails to extend the player’s deal, Afellay could move on a free transfer status next season, however considering the situation the young star might already change colors on January.

Reports from the media suggested that Afellay is not interested in extending his contract as according to his agent, the player set his eyes for a future outside of his native country. This news should make Juve and Inter working hard in trying to lure him, however not only having to battle against each others, those two giants will also face competition for other teams such as Everton, Atletico Madrid, Hamburg, Arsenal, Fiorentina, Genoa and Sampdoria

In terms of prestige, surely only Arsenal that have the same pedigree as both Inter and Juventus, however things will get complicated should Afellay has specific preferences in choosing his new teams such as getting enough playing time. Getting a regular starting spot would be a little bit difficult to get in the Nerazzurri and especially Juve that already possessed plenty of quality midfield players that are good enough to compete with Afellay.

In the end the decision will solely relies on Afellay’s own judgment and off course which teams that have the best offer for PSV, should the Eredivisie club finally decides to sell him in January in order to at least get some cash for him. It will be interesting to see whether Juve and Inter can captured one of the hottest young talent out there as if one of them managed to acquire the 24-years-old signature they could really get a superstar in the making.