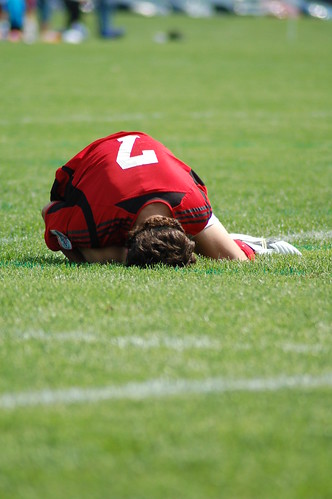 Injuries are a part of every sport and, yes, that even includes soccer.

It is a common misconception that footballers can’t really get seriously hurt.  With one of the longest schedules in duration along with hard tackles left and right and the general battle to win the ball, (plus did I mention the general wear and tear of a eight to nine month long season) injuries are more then prevelant in the world’s most beautiful game.  And next week when many of the world’s best nations begin to do battle, many of the world’s greatest players from each respected country will be absent from the starting lineup due to the unfortunate bad timing of the injury bug.

Unfortunately, that is just the way it is.  It would nice if only the best graced our presence on the pitch this summer in South Africa, but who will likely be the winners this year will also be the team that has the least amount of critical injuries and is to a certain extent the luckiest on the pitch when it comes to health.

And just in the last few weeks Germany’s star and captain Michael Ballack suffered a serious injury when he received a hard tackle in the FA Cup final.  It would be the first of two terrible breaks for the Germans who also lost keeper Rene Adler in pre-training as well.  And the same fate was suffered for Ghana when African star Michael Essien was ruled unfit for the tournament last week.  In fact Africa was given a double dose of bad news when Ivory Coast star Didier Drogba broke his arm just yesterday as well.  And the same can be said for South Korea’s hopes due to the potential loss of their most reliable goal scorer, Lee Dong-Gook.  Japan can also relate with the recent injury suffered by Shunsuke Nakamura who joins critical defender Yuji Nakazawa on the temporary disabled list for the Blue Samarai.

Chile’s 10 goal man from the WCQ Humberto Suazo is another potential scratch due to a hamstring injury and Italy’s prizedleader Camoranesi limped off the practice field a few days back as well and now they are announcing that Pirlo will likely join him on the disabled list.  Brazil can relate to this bad timing with the early exit of superstar keeper Julio Cesar with a strained back in a friendly earlier in the week and of course Cesc Fabregas of Spain is just getting back on the pitch in time to potentially play.

We Yanks have also been bitten by the injury bug between the late arrival of Oguchi Onyewu and Davies absence from the roster and of course are rivals in England already lost Beckham, might not have Barry, Ferdinand, and Cole in good form, and had two serious injury scares of Wayne Rooney and John Terry just a few weeks back.

These injuries are all troubling because you want to see the best teams play one another without any excuses, but that just isn’t always the case when you combine an eight month schedule with a sport much rougher then the credit it often gets from the media here in the states.

And the craziest thing about all of these injuries is the fact that the tournament hasn’t even started yet.