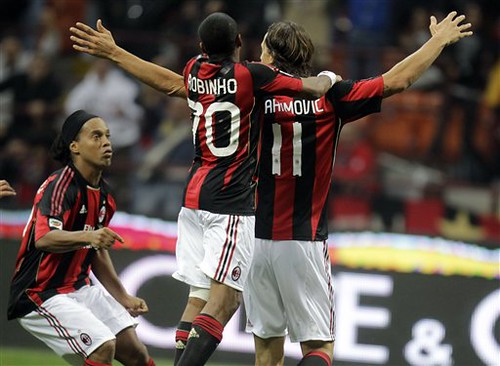 Following their recent good runs in the league, Ac Milan successfully carried that form in Europe as they managed to book their place in the next round of the Champions League after beating Auxerre 2-0.

Zlatan Ibrahimovic and Ronaldinho becomes the key figures in the Rossoneri’s victory as both players were the one that scored the goals, all in the second half providing a sight of relief for Massimiliano Allegri’s side who were forced to work hard in the match.

Playing away at Stadio Abbe-Deschamp, Milan were expecting a tough game from the home team that are sniffing at a slim chance to qualify to the next round as they mathematically could still make it. Putting on the same line-up that have been shown in the last few games in Serie A, the Rossoneri played a very steady first half and manage to create the better of the chances despite the strong pressure from the home team.

Dominating possession, Milan’s lack of sharpness in front of the goal becomes the sole reason the first half ended goalless as the home team were also unable to give lots of problems for Christian Abbiati. The second half started in an almost the same pace as the first period, although the Rossoneri did try to push up more and created some openings before Zlatan Ibrahimovic finally broke the dead lock in the 64th minute after pouncing a loose ball just outside of Auxerre penalty area.

Trying to salvage a point, the home team pour forward harder and forcing Milan to play a little bit deeper as the away side seemed content in playing through the counter attack. The Rossoneri’s tactic worked pretty well when just couple of minutes before the final whistle a lovely combination from two Brazilians, Robinho and Ronaldinho carved open the French team’s defense leading to a wonderful goal from the former Barcelona superstar.

Ronaldinho’s goal means a lot for the player, who has been playing from the bench in the last few games including today where he was put on the field to replace Ibrahimovic just five minutes from the full 90. The Brazilian’s late goal surely wrapped up the game as Auxerre that didn’t actually had plenty of goal scoring opportunities finally gave up the fight making the Rossoneri cruised through the final couple of minutes without any trouble. The result also confirmed the Italian giant’s place in the second round after Real Madrid successfully beat Ajax in the other match of the group.