Iaquinta Out For At Least Two Months 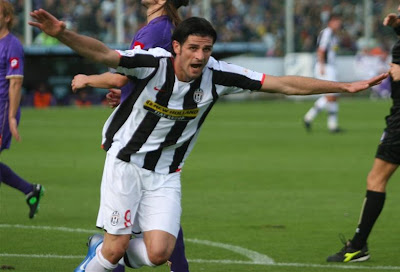 Every week we have a new theme or tradition here at the SATO.  It is called Name the Injured Player for Juventus….

I don’t know what it is about Juve, but the squad seems to be the most unlucky of any in Serie A.  Maybe it’s the fact that many of their stars are older then most stars in the league.  Alessandro Del Piero would be a example of this aging injury report that Juve seems to accumulate.  But for every injured Del Piero or banged up Buffon there is a player like Diego who was injured as well.  So maybe its simply bad luck.

Well whatever you want to point the finger too, it just got that much harder on Juventus.  Vicenzo Iaquinta recently went down with an injured knee leaving the Juventus offense just that much more desperate.  The injury occurred last week when the club traveled to Siena.  Iaquinta did not play in the match and was ruled out before the competition began with that bad knee.  And what officials hoped would only be a brief stint on the injured reserve has resulted in the star striker needing surgery on that knee.

Iaquinta has been ruled out until January and Juve must find a way to cope without the star player.  One thing that certainly will not hurt is that Diego has just arrived back in the lineup giving the squad some much needed firepower.  It has been a year filled with many obstacles for the Italian powerhouse squad, but if they can continue to overcome these setbacks then Juve will be a contender no matter what happens.