I Was Right–Crazy Coaches Work! 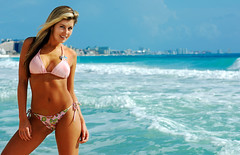 So, in the “change of heart” category I totally won yesterday when Bayern defeated Lyon 1-0.  I just had a thought that coaches who motivate through the media can have great effect on their players and that it somehow works in International Soccer when it doesn’t work anywhere else.

I think I know why it works in Soccer.

Soccer players may be tough, and they may be gritty, but they also have a machismo that does not exist anywhere else in the world–except in weird Italian night clubs, but that’s another story.

This is why Soccer managers throughout the world keep complaining about buying players–they were once themselves players and they know that you feel inadequate without people around you who are–adequate.

So, who has the prettier team with the most preening and posturing?  I think that might be Real Madrid, followed by Inter, and maybe United.

It makes sense now that Inter beat up on Barca–they just have Messi and he’s the prettiest by far.  It’s a very weird situation we’re in.  Now that I know this I’m going to be looking at dudes way too much.  However, you cannot deny this as truth.

Dudes want to be the prettiest on their “pretty” team.