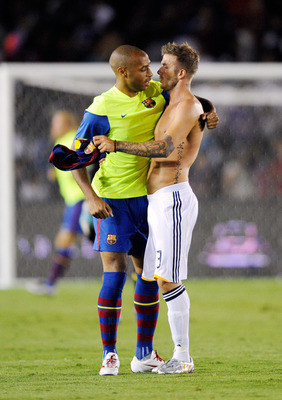 New York Red Bulls forward Thierry Henry will miss his new side’s big match tonight against David Beckham’s LA Galaxy. On paper weeks back the match looked to be the biggest left on the MLS schedule, but Henry will not dress due to sprained right knee that the Frenchman aggravated a few weeks back and Beckham is certainly not a guarantee to play 90 minutes tonight either. Henry supposedly played injured for a few weeks, but the organization wants to rest their aging star so that he will be ready to go the last few matches of the season and hopefully be a force in the postseason as long as New York makes it of course.

And with no Henry, Beckham isn’t a guarantee to play a lot of minutes tonight either. The Englishman has played in a few matches as a reserve since his arrival back to the club from that terrible knee tear last spring on loan with AC Milan, but I don’t believe Sir Golden Balls has played over 35 minutes of action in a match yet. I would expect to see the league’s highest paid player in limited action yet again most likely as a reserve coming in  off of the bench in the second half. Similar to Henry, the Galaxy want to ease Beckham back into the starting eleven with only a brief amount of time left before the postseason starts.

But although Becks and Henry probably will not play more then a combined 40 minutes tonight, you can still see many of the league’s most talented players on the pitch including Landon Donovan, Edson Buddle, Rafael Marquez, and Juan Pablo Angel.

And if you want to watch the match it will be on ESPN2 tonight at 11:00PM.