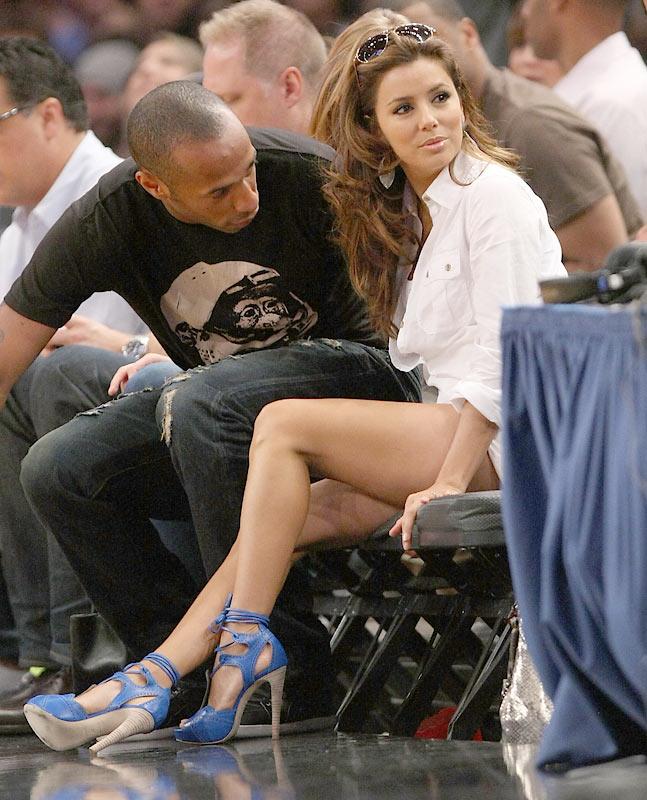 They say a picture is worth a thousand words and I think Brett Favre may have learned that lesson earlier this week (drum roll please). But he wasn’t the only athlete pictured this week allegedly performing a naughty act. Take a look at newly signed New York Red Bulls forward Thierry Henry checking out the goods of Eva Longoria AKA Mrs. Tony Parker at a recent San Antonio Spurs-New York Knicks game.

Henry and Longoria’s husband are likely good friends considering they are two of the premier French athletes in the world, but it appears that while Henry was checking out Parker’s skills on the basketball court he figured why not take a quick sneak peak at the Mrs. Tony as well while they sat together court side. Now of course this shot could have been taken to frame Henry and perhaps the Frenchman was merley reaching for his jacket behind him or his soda and in a wacky Larry David sort of moment of timely awkwardness (after all his left arm appears to be reaching for something) he was perceived to be eyeing Eva.

But with all of the French footballers troubles in the papers over the last year, including several of the best players targeted for purchasing an unknown under-aged prostitute, it isn’t difficult to target Henry as an alleged saucey eye undresser. After all Pepe le Pew was also French and he was also awfully aggressive with the ladies back in his day. But regardless to whether or not Henry was in fact stealing a look or not, he shouldn’t expect to get too far with Mrs. Parker anyway. After all she does have her hubby’s #9 tattoed on the back of her neck; whereas Henry is currently #14.